The Boy in the Song: Hey Jude

Home » All entertainment » The Boy in the Song: Hey Jude 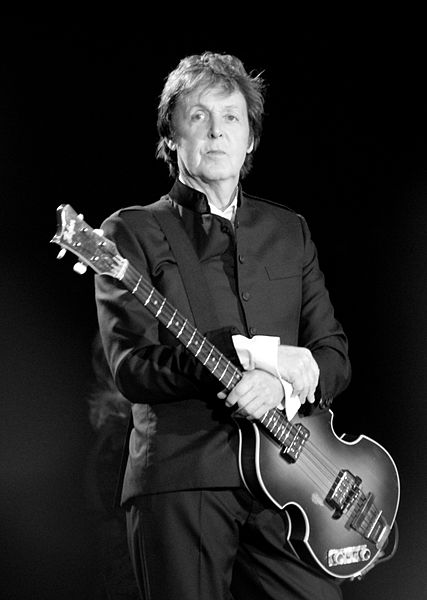 Hey Jude was the first record that the Beatles released on their own label, Apple. It was released in 1968 and its original title  was Hey Jules – it was written for Julian Lennon who was five years old when his parents were divorced.

John Lennon had married Cynthia Powell in 1962 and Julian was born the following April, just when Beatlemania was just starting to take off. John was on tour when Julian was born.  John and Cynthia were to split up because of Lennon’s affair with Yoko Ono and Julian grew up not really knowing his father and only having minimal contact with him in the years immediately after the divorce.

Paul was a much more natural father than John Lennon. Paul’s own mother had died when he was fourteen and went onto have five children himself. (One being his first wife Linda’s from a previous relationship – Paul adopted the little girl).

He wrote Hey Jude for Julian during the divorce and Paul and Julian became close over the years – Paul was like a father figure. So much so that Julian Lennon said later that there were many more pictures of him as a child playing with Paul than there were of him with his own father. 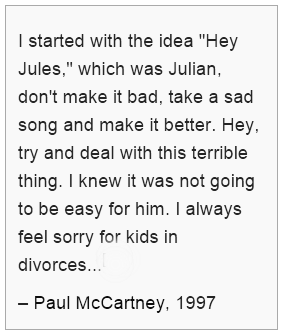 The first iteration of the song was written by Paul when he visited Cynthia at the Lennons’ home in Surrey just after Cynthia had had her suspicions about the affair confirmed. Paul had gone to lend his support and as a songwriter one of his first instincts was  to write the song as a small measure of comfort for Julian. Apparently the initial song had come to mind as he was driving down to Surrey. In her autobiography, many years later, Cynthia praised Paul and said how thoughtful and comforting he had been at what was a dreadful time for her.

Paul later retitled the song from Hey Jules, as ‘Jude’ was easier to sing. He didn’t reveal the inspiration behind the song until several years later.

“It surprises me whenever I hear the song.

It’s strange to think that someone has written a song about you. It still touches me.”

It’s still a great song, after all these years.