Home » All society » The Hindenburg Disaster 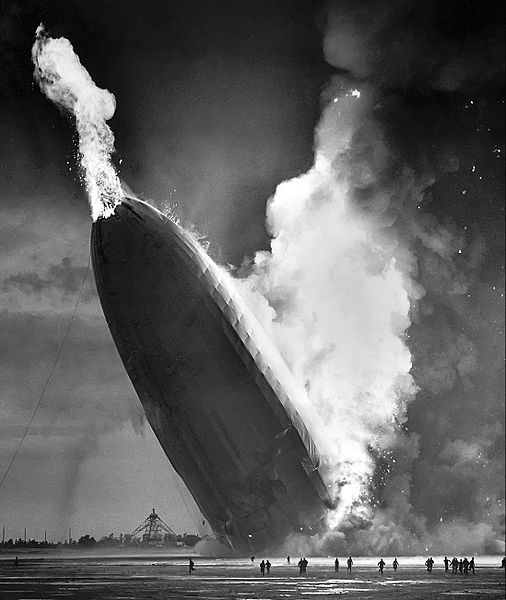 When the British R101 Airship crashed in 1930, the public began to lose confidence in this supposedly luxurious mode of travel.

Passengers were transported in a ‘gondola’ – a capsule fitted out to be somewhat like  luxury ocean liner.

The R101 disaster sowed seeds of serious doubts about the safety of airships but the events of May 6th, 1937,confirmed them.

The German Hindenburg airship was attempting to dock – that is, latch onto her docking tower – in New Jersey when she exploded into flames.

The airship had flown from Germany and her return journey, scheduled for the following week, was sold out – many people were planning to go to England for the coronation of King George VI and Queen Elizabeth.

But it was not to be.

There were ninety seven people on board. Thirty five of them did not survive.

In addition,one of the workers on the ground was killed.

When you look at the photographs,or the news footage, it’s hard to believe that there were any survivors.

You can see genuine footage of the crash in the video below.

The last meal aboard the Hindenburg

There is no better way of showing how the airship luxury compared to the great ocean liners than by looking at the meals the passengers were served.The ship burst into flames and plummeted to the ground at 7.25pm. The chances are that many passengers would have eaten their dinner by that time. Because the ship had come from Europe, they may have eaten dinner and have been looking forward to supper.

For dinner,they would have enjoyed a starter of beef broth with dumplings, Rhine salmon as the fish course, roast gosling Meunière with mixed salad and apple sauce as their entrée and pears condé with chocolate sauce as dessert. Coffee and fresh fruit was available after dinner. It’s unlikely that supper was served but had it been it would have consisted of Paté à la Reine to start, roast filet of beef with mixed salad followed by cheese, fresh fruit and coffee.

See the footage of the disaster.