Take a seat: A quick look at the evolution of chairs

Home » All style » Take a seat: A quick look at the evolution of chairs 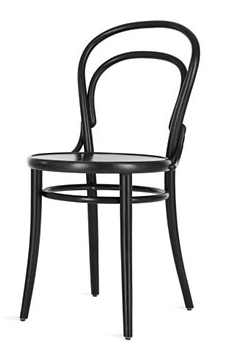 It’s fair to say that today most artists and designers ideas are shaped by changes in the world around them, whether they choose to respond by creating something in line with the times or an out of sync statement.

However, for the masses it’s only since the 20th century that there has been room for the luxury of anything other than basic function in furniture design. Take the chair you’re sat on, it’s been part of a long design process developed out of necessity that extends back to early man and, depending in what era you took a seat and how wealthy you were, the experience would have varied greatly.

From the times of needing a nice rock or two to seat your Stone Age neighbours while you impressed them with your wildebeest roasting skills to the eras of ancient Egypt, Greece and Rome; the design of chairs certainly progressed. One example is the sella (a kind of or stool/chair) which was the most popular type of seating in ancient Rome, being portable and cheap to produce it could be used by slaves and emperors alike.

However, the addition of intricately decorated inlays of precious metals and ivory were reserved only for the wealthy; sure to impress your neighbours without even the need to get your servant to roast a lamb or bring out the grapes. In the middle ages chairs became rarer as they were expensive, even for rich households, so instead people sat on benches. Comfort was far from an objective as benches were designed (or rather thrown together in the free time you weren’t farming or catching small pox) with a long hard wooden seat for use when the whole family sat down for dinner while you impressed them with your one pot stewing skills. Decades later the industrial revolution brought with it the steel coil spring which was first patented in 1895 in America for use in chair seats. Finally comfort had become far more important in design and this continued with a spike in innovation into the 20th century due to increased leisure time combined with the invention of good artificial lighting, radios and TV. So now you could invite your neighbours round well into the evening and seat them in luxury while you impressed them with your new TV and dashed off to quickly microwave the food you said you’d cooked from scratch.

It’s easy to see that even from a brief history the chairs in wealthier households had the luxury of independence from necessity and functionality (or were at least spiced up with a little decoration) and having furniture as ornaments was reserved strictly for them. It has only been since the modernist movement that access to new designs became available to a much wider audience as it brought technologies from WWII which were developed for the production of furniture. These included new materials and techniques such as wood-bending and the use of tubular steel which resulted in experimentation with design techniques to create many new iconic, sleek and simple pieces which could be re-produced everywhere with the goal that mass-production should enable a wide variety of designs to be accessible to more people. For the first time these new technologies and production methods gave designers the means and freedom to be able to respond to changes in society, not just to create a basic functioning product, but having the freedom to choose to follow or go against the fashion of the time.

A quick look at some top 10 lists of modernist chairs proves there are so many considered iconic that the contents of each list can vary every time. Nonetheless many share features developed from the new technologies such as bent wood and shiny tubular metalwork. The Model 3107 chair was designed by Arne Jacobsen and utilised the new plywood bending technique into three dimensions to create a visually interesting chair. A massive 5 million have been produced since its invention in 1955, with a number of developments since the simple stacking version including wheels for an office chair and different forms of upholstering. 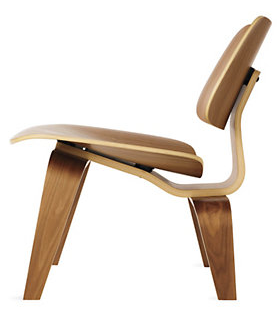 Another example is Eames Lounge Chair Wood which was named ‘The Best Design of the 20th Century’ by Time magazine. Perhaps the most iconic designs using tubular steel are the snazzy waiting room classic that is The Barcelona chair and the sleek psychiatrist-style Le Corbusier LC4 Chaise Longue.

While the designs above embraced the latest innovations, there were others that did the same whilst going against the fashion of simplicity and polished geometrical lines. One example is the Eames Lounge Chair designed by husband and wife team Charles and Ray Eames. The 1956 rosewood Eames Lounge Chair may be considered one of the most iconic modernist chairs and is housed in the permanent collection of the Museum of Modern Art in New York, but for me that doesn’t stop it being ugly! 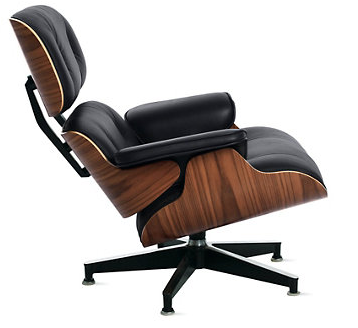 In fact when it was first made Ray sent a letter to Charles saying it looked ‘comfortable and un-designy’. Yet that’s the point as, though its appearance may be less at home in a sleek waiting room or office, it was designed to be an ergonomic and comfy chair, marking a shift in chair design of the time. The intended vision was to go against the fashionable harsh geometric lines and design a comfortable and inviting chair, as Charles said, with ‘the warm, receptive look of a well-used first baseman’s mitt’ achieved with three moulded dark brown plywood shells for the headrest, back and seat to hold the black upholstered cushions.

These designs that are considered the most iconic are not always the most re-produced or voted the best looking, but are the ones that were the most important to the development of the modernist movement or the ones that symbolised change and innovation. Just like a classic novel, the fact that it’s given the title ‘classic’ or ‘iconic’ doesn’t automatically mean that everyone will enjoy reading it; some classics can be seen in the modern day as pretty awful but that doesn’t make them any less important. In any art form, from furniture design to music, it’s important to acknowledge the pieces that chose to move with or against the times they were created in and those that changed the historical timeline of art and design altogether.