Who was Harry Houdini? 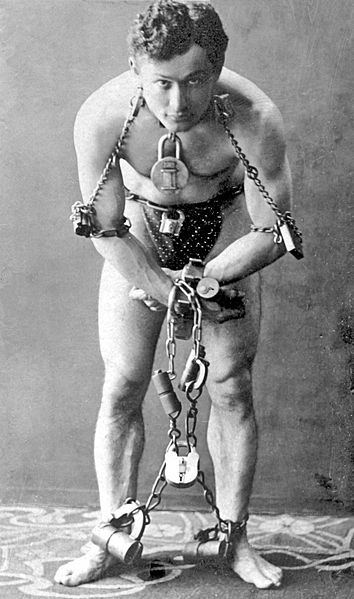 Houdini was born as Ehrich Weiss in Budapest in 1974. As Harry Houdini, he became world famous as an escapologist and magician.

He was best known for his daring and seemingly impossible escapes. Sometimes he was placed in a crate, in chains and submerged in water. Another famous escape act involved him being suspended high in the air in a straitjacket and handcuffs.

Houdini never let down his audiences.

His family moved to the United States when Ehrich was a child. He was often known by the nickname ‘Ehrie’, hence the transformation to ‘Harry’.

He started performing when he was only nine years old – as a trapeze artist in New York and fascinated audiences with his exploits for many years.

Contrary to popular myth, he did not die when performing an escape.

How did Houdini die?

There were plenty of theories surrounding his death at the early age of only fifty two. At one point, some people suspected that his wife had killed him. It’s said that she had found out about her husband’s various infidelities.

It was thought that he was having an affair with Charmain, the widow of writer, Jack London. The diaries she left seem to bear this out. It’s said too that she paid witnesses to falsify the ‘punching story’ which enabled her to receive a higher life insurance payment.

‘The punching story’ involves three young students who visited Houdini in his dressing room.One asked if it was true that Houdini could easily bear harsh blows to his stomach muscles. Without giving Houdini the chance to brace himself,the student proceeded to rain punches which,many say, were the cause of his death.

The Secret Life of Houdini: The Making of America’s First Superhero

Another theory insists that he was murdered by spiritualists. Harry died in 1926 and there had been a huge revival in the popularity of spiritualism. The First World War and the massive, deadly influenza epidemic had left many people wanting to contact their departed loved ones.

Houdini was convinced that spiritualism was nonsense and set out to prove his case whenever possible. It’s said that a lot of practitioners were making a great deal of money from the gullible and did not want this powerful and seemingly supernatural character debunking their industry. Could the spiritualists have killed him?

There was also a theory that Houdini was a spy. Because he was able to escape from seemingly unbreakable locks, perhaps this speculation is an understandable myth. The book you see on this page explores that possibility and all other aspects of Houdini’s strange life.

The fact is that Harry Houdini died of peritonitis brought about by a ruptured appendix. This is, assuming that we trust the forensic facilities of the nineteen twenties. Did the punching incident cause the ruptured appendix? Medical science is still unsure about whether that could happen.

Houdini was a trouper in the showbiz tradition of ‘the show must go on’. During his final performances he was certainly ill. Was hid death due to the simple fact that he had naturally contracted appendicitis which was made fatal because he simply refused to see a doctor?

See the video below. The particularly strange story is about Houdini’s imaginary son. Weird.