In these days of TV talent show contestants hogging the airwaves one can be forgiven for getting the impression that teens are growing up ignorant of real music. But it’s also clear that playing a musical instrument hasn’t gone out of fashion. I think that we can thank our schools for this happy turn of events, and the growing amount of twenty-something musicians with an ear for a song.

Haim were one of a hundred bands playing at England’s Latitude Festival last summer, a lesser known event of the famous festival season. Latitude is held out in the wilds of the Suffolk countryside and featured so many of the bright new bands from Europe and the U.S. it was one of the hot tickets of the year. Haim played on the main stage, third on the bill on the final night, followed by Tame Impala and The Black Keys. 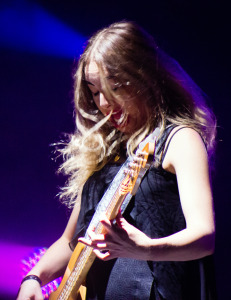 What is different about Haim is that in so many ways they are unfashionable. Uncool. The kind of kid who hasn’t seen through Corpo-pop yet will find their appeal baffling. A good old fashioned soft rock band with proper instruments, chord structures, middle-eights and microphone stands.

I heard their breakthrough song “Forever” and saw it as a wonderful hybrid of near-namesake mid-90s MTV smash “Always Forever” by Donna Lewis and an older favourite from way back in the 80s, Stevie Nicks’ “Edge of Seventeen”. The song would fit in so snugly with those MTV American indie ballads. You know the ones. “Don’t Speak”, “The Reason”, “Truly, Madly Deeply” “It’s Been a While” “How to Save A Life”. Songs that at the time seemed facile and too well upholstered compared to the wild energy of The Pixies, Soundgarden and Nirvana.

Yet what these old MTV hit songs had in common was song-craft. At that time – the late 80s – rock music was leaving behind that old-school troubadour spirit and pop was king. Great seventies rock stars had either ‘gone eighties’ like Springsteen, Rush and Neil Young or had disappeared into hair-band hilarity. Dig deeper though and the likes of John Mellencamp and Steve Earle were out there gigging, keeping the flame alive. It make perfect sense that parents who had grown up with Crosby Stills Nash and Young, The Eagles and Fleetwood Mac might raise talented, appreciative kids with an ear for this stuff.

So here is Haim, three sisters and a few mates, who grew up in L.A. and seemed destined to play. Sure, if you watch them with a hangover it seems like Alanis Morrisette’s been cloned in some hippie lab off Sunset Boulevard and like a lot of modern music it sounds all too familiar.

But isn’t it fabulous that such an uncool band is taking the festivals by storm and a new audience is ditching the tablet, unplugging the ear buds and learning to play the old way.

And the Fleetwood Mac connection was laid bare at Glastonbury…