Irrepressible:  The Life and Times of Jessica Mitford

Home » All books » Irrepressible:  The Life and Times of Jessica Mitford

Irrepressible:  The Life and Times of Jessica Mitford. 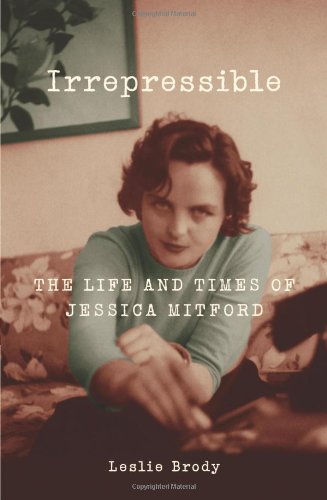 Irrepressible: The Life and Times of Jessica Mitford

Jessica, almost always known as Decca, was one of the famous aristocratic Mitford sisters who were notorious in the  twentieth century.

There were six sisters (and one brother who died in the Second World War) and all drew notoriety in their own way.

As society girls,they were constantly in trouble during their teens. Their mother always remarked that if ever she saw newspaper headline starting with the words ‘peer’s daughter…’ she would wonder what one of her offspring had been up to now.

But in addition to being fun loving, and having wonderful senses of humour, the family had strong political views too – but not necessarily the same ones.

Indeed their parents, who became increasingly opposing in their political views, separated because of it.

Decca, even as youngster, veered towards communism. And when she was still a teenager she fell in love with her second cousin, Esmond Romilly, and the couple eloped to fight in the Spanish Civil War. Contrast this with three of her sisters:

But the book you see here, which is highly recommended,isn’t a book about politics and ideology despite Decca’s life-long beliefs. It also tells about the adventures of her life and the tragedies and how she coped with them.

She married her first love, Esmond Romilly, and in addition to Spain,they travelled widely in their own impoverished way. They worked a bartenders in Miami and at various other jobs in the States including market research and selling door-to-door.  Their first child died when six months old. The couple had another child in 1941 and Romilly was killed in action in the same year. At the age of twenty-three, Decca found herself alone in America, a widow and a single mother.

But the book is full of humour too as was Decca, in common with the other Mitford sisters.

When Decca was expecting her second child in 1941, her husband Esmond was away in the air force. The couple were perpetually hard up. Decca was staying with a friend in Washington who urged her to make proper hospital arrangements for giving birth. Decca replied that all one needed was:

“A quantity of stout brown paper to cover the bedclothes, boiling water and a competent doctor.”

She was firmly told that she should give birth in hospital. Not having the money for private care she booked into a public ward. Trouble-free, she gave birth to a baby girl and, as was usual in those days, remained in hospital for ten days. But the communist-minded new mother noticed that the private-room patients were getting superior treatment – better food and  immediate attention. She disliked this preferential and callous attitude of the nurses so decided to teach them a lesson and entertain the other mothers in the public ward at the same time. She devised a plan explained it to her ward-mates:

“The next time Mrs __ rings her bell, I’ll count to ten. If a nurse hasn’t come by then,we’ll all wet our beds.”

It worked. Sure enough, a nurse didn’t appear when one of the public ward ladies rang her bell. The other new mothers, according to plan, duly peed in their beds.  When the nurse finally appeared:

‘She was faced with changing all nine beds, eighteen sheets. For the rest of my stay at Columbia Hospital, one only had to touch bell for a nurse to come flying.”

See the book at Amazon.