Who was Isadora Duncan? 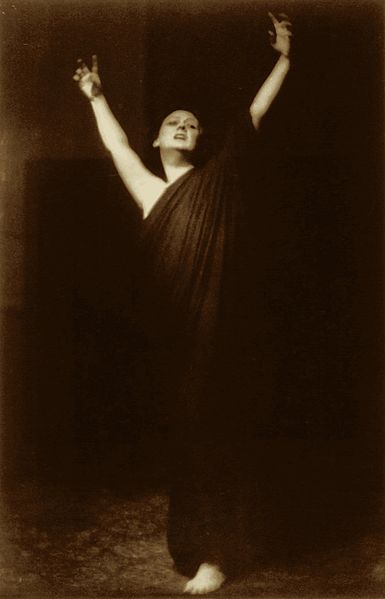 Although she was American, Isadora Duncan was virtually unknown in the States during her short and rather scandalous lifetime.

A free-spirited dancer, she found her fame in Europe. When she first appeared on the stage in Victorian New York, the public was scandalised.

“This woman is an outrage, scandalous and a threat to all decent societies. She should be locked up at the earliest opportunity or, at worst, exiled to her beloved Europe along with other low-minded infidels.”

He was obviously not a fan. But he was right about one thing. Europe loved her.

She danced wearing diaphanous, skimpy garments. Her movements were free and unstructured. In the days when dancing meant ballet shoes, classical music and tutus, she was a breath of fresh air for Europeans and a scandal for Americans.

It didn’t help that she had numerous affairs which produced illegitimate children.

But Isadora was determined not to marry. She had been born in 1878 in San Francisco.  Her mother was a strict Victorian lady and her father more liberal- but also something of a scoundrel.

The marriage didn’t last and Isadora’s father went on to marry someone else. (He, his third wife and their daughter died in the SS Mohegan disaster). It made Isadora determined not to marry.

In 1913, it became known that Isadora had two illegitimate children – by two different men. Her daughter was fathered by a theatre designer and her son by a member of the famous Singer (sewing machine) family.And in the April of that year, tragedy struck.

Her children were in Paris with their nanny, Annie Sim,  and being driven around the city be a chauffeur. He stalled the car and  to restart it, went to crank it by hand. But when he left the vehicle, he forgot to apply the parking brake. The car rolled into the river Seine and the children and their nanny were killed.

How did Isadora Duncan die?

It took her some time to recover from the loss of her children. But finally she took a lover and had another baby. The child didn’t survive. Now forty five, she finally married. Her husband was a Russian poet and seventeen years younger than she was. Why did she marry? It’s said that it was because she was going to return to the States and it would be easier for him to enter the USA as her legal husband, rather than her young lover.

The pair had quite a riotous time in America involving a long motor tour that involved scandalised hotel managers discovering the couple nude and worse the wear for booze. She was doing nothing to regain a reputation in the country – quite the opposite. THe couple divorced shortly afterwards-he returned to Russia and she went back to Europe.

On 14th September 1927, she was in Nice. She was with a friend, Mary Desti – the two of them were working on Isadora’s autobiography. The story becomes confusing. That evening she was the passenger in a car. Today people are still debating about the make of car (A Bugatti or an Amicar?), they are still not one hundred percent sure who was driving (Benoît or Ivan Falchetto?) and whether he was a lover or simply someone trying to sell the car to her. But we do know the result.

The long and flowing scarf she was wearing around her neck became caught in a wheel of the car, strangling Isadora and catapulting her from the vehicle. She was killed instantly.

Her friend Mary Desti claimed that Isadora and her children had been cursed.

Some years before the accident that took the lives of her children, said Mary, she, Isadora and an unnamed ‘famous cinema vamp were travelling through Paris in a car. Isadora and the cinema star had a disagreement. The star yelled:

“I curse you. The gods of my fathers curse you and your children forever”.

Mary said that when the curse was uttered, the car was in the exact spot where the car containing the children was to stop just before its fatal plunge into the river Seine.