Who was Ivy Benson?

Have you heard of Ivy Benson? I doubt you have but her story is fascinating. Unusually, she was the leader of a swing band in England during the Second World War – and it was an all-girls band. They were incredibly popular. 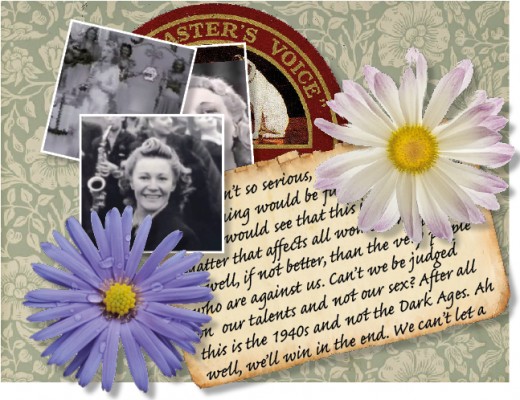 The Ivy Benson All Girls Band

Women came into their own during World War Two. They drove trucks and buses, flew planes, worked as machinists and engineers, worked decoding messages and in general, took over the jobs of the men who were abroad fighting for their country.

But for some reason, female musicians were frowned upon. But only by their male counterparts. Male musicians didn’t approve at all.

Ivy’s band played terrific music and during those war years, it’s said that her band was as well-known and popular as that of Glenn Miller. But who remembers her now? They eventually became the resident band for the BBC in London much to the chagrin of the male musicians. They would tolerate women as singers but trombonists? Drummers? Saxes? How dreadful!

Ivy first formed her band in 1939. They entertained the troops during the Second World War and endured. They were still entertaining soldiers overseas during the Vietnam War so many years later. 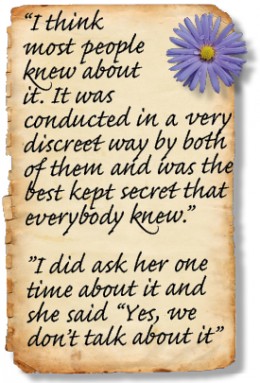 When women auditioned to play for Ivy,she would make a note if they were married. If they were, she would carefully point out that the life of a travelling musician and the role of a wife weren’t compatible.

She knew this from her own experiences.

Ivy’s first experience with a serious love affair started in Bridlington,in Yorkshire. She embarked upon a relationship with a man named Reg Connelly. He published music and he decided to help her in her career.

He did this to the extent of taking her to the United States where she was introduced to important bandleaders of the time. But Ivy and Reg were unable to marry. He was a married man and he and his wife had a handicapped child – he couldn’t abandon them.

So Ivy married another man but the relationship ended. Her second husband had the problem of being American – a problem because he refused to live in England and she was equally adamant that she wasn’t going to leave the UK. 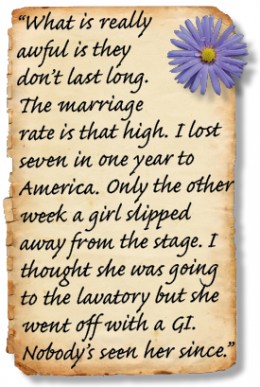 It wasn’t easy for Ivy to find and keep musicians in her band. This was especially the case during WW2. After all, her girls were attractive, young and intelligent. During the war, relationships were struck up that might not have ignited in peacetime. GIs – the American forces who were stationed in Britain – were a frequent attraction for the girls and the GIs were equally keen on the female musicians.

And she noticed that for some reason, it was the trombone players who were particularly difficult to keep. Why on earth was this the case?

I have a theory. After spending many years in the company of various musicians I have a mental list of their traits – male musicians that is. Most popular with the women are drummers (inevitably flirty), bass players (always have a great sense of humour) and pianists (it’s those long and elegant fingers…..)

Trombone players aren’t on the list. But when it comes to a girl trombonist – well, the guys would see her putting it carefully to her mouth, smoothly manipulating the slide, resulting in the most wonderful results emanating from the bell…..

Ivy was born in Leeds, in Yorkshire. Her father too was a musician and encouraged his daughter in he r career. She learned to play several instruments when she was growing up but eventually settled on the saxophone as her favourite. In common with many girls from Leeds in those days, she started her working career as a machinist for Burton’s Tailors.

When she formed her band, she liked the members to be good looking girls as that was best for business, but she insisted on a high standard of musicianship too. But she was a strict taskmaster and was concerned with keeping her girls safe. 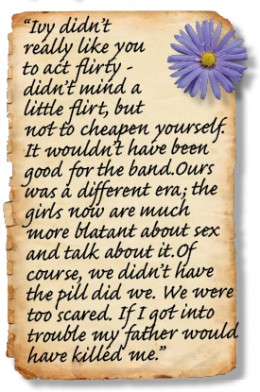 However, the girls were young and most were away from their parents and family for the first time. Suddenly they were earning money and were independent. Ivy didn’t want her girls to flirt and she discouraged such behaviour but she had little hope of keep in them all under control.

Some were as young as sixteen and enjoying their freedom for the first time.

But they were always in danger; it was ever-present during the war. When they were performing there was always the danger of air raids and most dance halls and venues had the same policy – that if an air raid warning sounded, the band on stage must keep playing until the patrons were safety in the shelters.

Of course, for young girls this just added to the excitement but the fact is that the band could have been killed at any time.

In the thirty years that Ivy ran her band,it’s estimated that she employed over three hundred women and girls. There was also a strong rumour that she had once used a man in drag when one of her regular girls was ill. 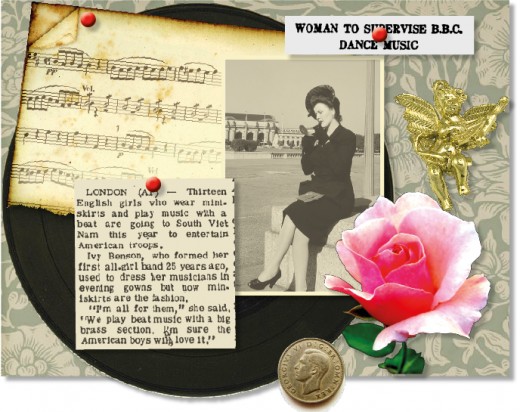 Could Ivy play that Sax?