Who was J. Habakuk Jephson?

Home » All society » Who was J. Habakuk Jephson?

In December 1872, an American ship was found sailing off the Azores in the North Atlantic Ocean. It was in good condition, but its lifeboat was gone — and there was not a soul on board. The ship was called the Mary Celeste and for years there was speculation about what had happened to the ten people aboard. They had vanished into thin air.

There was no sign of a struggle or fight. Other than the lifeboat nothing seemed to be missing from the ship and its cargo was intact. Even the personal belongings of the disappeared crew were still in place. 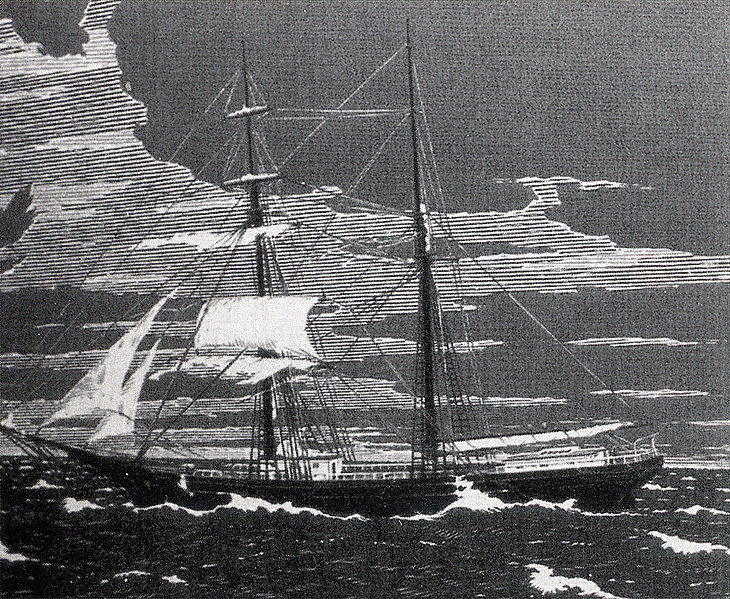 Eleven years later, a prestigious London magazine, the Cornhill, published an account written by a survivor of the ship’s fateful voyage. Was the mystery solved at last?

Jephson’s story was one of intrigue and murder, along with an undercurrent of racial tension, madness and slavery.

Jephson’s account explained that he was an American doctor. Before his momentous sea voyage, he had been injured in the civil war and nursed back to health by an old slave woman. She realised that he was a known abolitionist and gave him her most treasured possession.

This was a smooth black stone that was curiously shaped. It resembled a human ear. Jephson carried it with him as a good luck token. He took it with him when he undertook a sea voyage on the Marie Celeste, which he decided to take for his health. In addition to the small crew, there were two other passengers plus the captain’s wife and young daughter.

The Marie Celeste was sailing from Boston to Italy. He described one of the other passengers as a ‘mulatto’ named Septimus Goring from New Orleans. As the voyage proceeded, Jephson noticed that Goring was behaving strangely. But he had little time to reflect on this because tragedy struck.

Six days into the journey, the captain’s wife and daughter disappeared. It was assumed that they had fallen overboard and drowned. Two days later, in his grief, the captain shot himself. The voyage was becoming a nightmare. Minor mishaps took place and Jephson noticed that Goring, who he now assumed was ‘maniacal’, was taking a strange interest in his black stone good luck charm,

The days passed uneasily and the crew realised that someone had been tampering with their navigational equipment. They were no longer en route to Italy but were approaching the coast of Africa. Before the crew could return to their correct course, the ship was besieged by canoes full of natives from the nearby coast. One by one, the crew and passengers aboard the Marie Celeste were attacked and thrown overboard – apart from Jephson and Goring. In fact, despite his fear, Jephson noticed that the attackers we taking their orders from Goring and he was in charge.

Jephson was taken ashore and to the natives’ village. There, the man who appeared to be their chief took Jephson’s lucky stone from him and placed it on a statue of Mohammed where it fitted perfectly – the stone had originally been a part of that statue, which was hundreds of years old.

When a small group had left the tribe, many years before, they had  chiselled off the ear and taken  it with them for luck. Legend had it that one day the ear would be returned — and so it had. The natives now ascribed a god-like status to Jephson, the man who had restored their sacred statue.

Goring realised that he could no longer have full control over his tribe of warriors while Jephson was around but he knew he couldn’t kill him. The only way to get rid of him was to cast him into the ocean in a small boat, thus setting him free. As he did, Goring told Jephson that his father had been white and his mother a slave. When the father died, the mother and child were treated appallingly by white people, the mother finally being lashed to death. He told Jephson to take back his message of hate and revenge.

Jephson was picked up a couple of days later by a British steamer. In his account he said that he hadn’t spoken up before because even though eleven years had gone by the subject was a painful one for him. But now he was dying and wanted the world to know the truth.

At last, an eleven year old mystery had been solved. But there was just one problem.

The story had been completely invented by Arthur Conan Doyle

The mystery of the abandoned ship was fact. Conan Doyle, then an unknown writer, had simply written a fictional story based on the real disappearance as a fantasy of what could have happened. Despite the fact that the Cornhill magazine printed fiction, the media and the public seized on the story and for many years considered it fact.

You might have noticed that when I referred to the real ship in the first paragraph, it called it the Mary Celeste because that was the name of the genuine mystery ship. Relating ‘Jephson’s’ story, it became the Marie Celeste, just one of the many things that Conan Doyle altered in his account.

Unfortunately, these details were close enough for the public to believe that the story was fact. For example, the real disappeared captain’s name was Briggs; Conan Doyle’s captain was Tibbs. Close but not the same. But this didn’t matter to the public who eagerly took the story as pure fact.

When Jephson’s story was published in January 1884, the Cornhill‘s policy was that authors received no byline so Conan Doyle wasn’t credited. He was an aspiring writer in those days though and the cheque was more important to him,especially as it was the first time he had been published in a prestigious magazine. But his fame grew. It would be 1891 before it became known that he had written Jephson’s fictional account.

But he kept the story of the ghost ship alive

Maritime disasters – even abandoned ships – were not unusual in those days. The story of the Mary Celeste, as most maritime scholars agree, would have faded into obscurity had it not been for Conan Doyle reviving the public’s interest in this still-unsolved mystery.