Friday, May 3rd, 1901 was a beautiful day in Jacksonville, Florida. The sky was blue and there was no wind – it was perfect Floridian weather.

At the Cleveland Fibre Factory, workers were sitting outside enjoying their lunch and there was a delicious smell of food cooking on a wood burning stove from a nearby shanty. Unfortunately, it wasn’t just the smell that was floating through the air – so were some sparks. Suddenly a wind picked up and the sparks were blown onto a platform containing mounds of Spanish moss that had been laid out to dry in the sun. 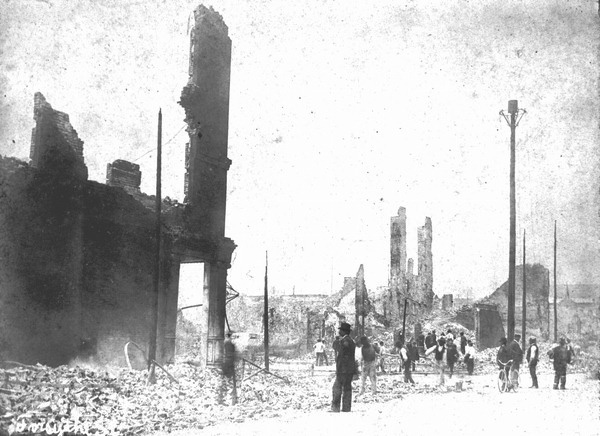 As the wind intensified, the moss began to blaze. Some of the workers tried to douse the fires using buckets of water but the wind carried the flames along and into the warehouse. Within seconds, the building was ablaze. It was made from pine, it had combustible shingles and it was packed with dried moss. Not long after the first sparks had drifted over, the roof of the warehouse collapsed.

The burning moss fibres rose into the air, spreading the blaze to nearby buildings. The flaming moss landed on the wooden roofs of houses, travelled through open windows and set everything in its path on fire.  The workers had summoned fire department who tried hard to contain the blaze but it was uncontrollable.  The fire chief sent urgent telegrams to neighbouring towns asking them to send their fire crews, as a wall of flames roared through the streets.

Acres of Ashes: The Story of the Great Fire That Swept Over the City of Jacksonville, Florida

The residents of Jacksonville didn’t realise the danger at first. But it soon became evident that they needed to get out – fast. Families loaded their valuables into wagons to try to escape. Some streets were obstructed by now, others were intolerable because of the heat. Horses panicked. There was chaos.

Many people fled to the substantially built Windsor Hotel but had a narrow escape when that too started to burn. Then the equally well-built St. James Hotel was engulfed. Schools,offices, homes, the city hall, places of worship, police and fire stations – all were destroyed.

Many people believed it was the wrath of God. Others set to work helping their fellow townsfolk.  People whose homes were still standing took in the people whose properties had been destroyed. Young and fit men carried the sick and elderly to safety. Many were heroes.

One young man who was rushing to safety carrying his valuables saw an elderly couple struggling with a sewing machine and trying to escape from the flames. “Leave that” he cried to them”save yourselves”. The woman replied “How can we, sir? This machine is the only support of my poor old husband”.

The young man abandoned his own valuables and led them- and the sewing machine – to safety. 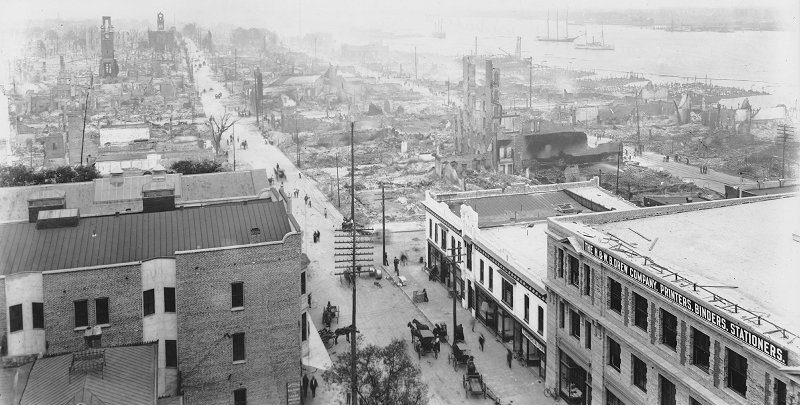 Eight hours after the fire had started, the fire department declared that the blaze was under control. People camped for the night wherever they could find space. In the aftermath, residents said:

“On Friday, we had a fire. On Saturday we recovered. On Sunday we worshipped and on Monday we issued the first permit for the reconstruction of our city”.