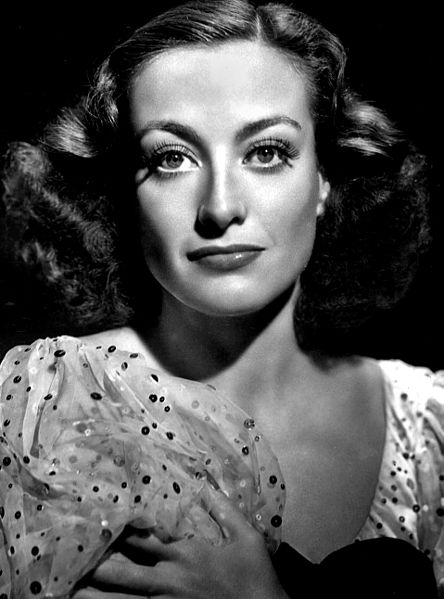 Whether these revelations are true is a matter of conjecture but Christina claimed that her mother had adopted her and other children to enhance her fame, rather than because of maternal feelings.

The book reveals stories of abuse and tells of Joan’s affairs – with both men and women. Oddly, one of the other adoptees backs up Christina’s story; the other two do not.

What appears to be true is that Joan, in common with many Hollywood stars, was a complex personality. She had an unusual childhood herself.

Her father had abandoned the family shortly before Joan was born. Her mother had then remarried and Joan grew up believing that the new man in her mother’s life was indeed her father.

She was married four times. She married her first husband when he was only nineteen (she was several years older) and he was the then-gorgeous Douglas Fairbanks Jr. They had met when working on  movie together.

It seemed like a perfect marriage between the two attractive stars. They travelled to England where they were feted by society and even royalty. But this didn’t interest Joan who was more involved with the movie business.

The marriage ended after four years due to her having an affair with Clark Gable. However, Fairbanks was one of the people who defended her reputation when Christina published her tell-all book in the nineteen seventies.

Two years later, she married another actor, Franchot Tone. During their marriage, also of four years’ duration, they made several films together. In addition, Joan had seven miscarriages. There are many people who  believe that her inability to carry a baby to term was because of one or more previous illegal abortions.

When that marriage was over, Joan took yet another actor to be her husband, Philip Terry. Believe it or not, this too lasted for four years. It was during this marriage that Joan adopted another child, a boy. She had adopted her tell-all daughter, Christina, in between marriages.

A further four year marriage took place but this time nine years after Joan and Philip were divorced. This time was different in another way too – her fourth husband was not an actor. The fact that the marriage lasted the seemingly-required four years was a coincidence this time – Alfred Steele, who was the CEO of the Pepsi Cola Company, died of a heart attack at the age of fifty eight.