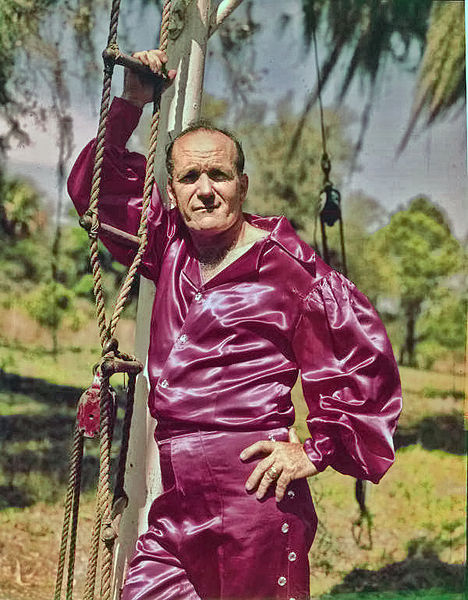 Karl Wallenda and the Seven-Man Pyramid

Karl Wallenda was born in Germany in 1905 to a circus family. He was the patriarch of the famous – and often tragic – performing Wallenda family. His descendants are still performing to this day.

He started performing when he was just six years old. This is a family tradition that has been continued.

When he was still a teenager, he formed his own act which included his brother and a young girl who was eventually to become Karl’s wife and the mother of his children.

The troupe moved to America where they became a great success.

They performed in the air on the highwire and on trapezes. Karl was against safety features such as safety nets. He claimed that they gave performers a sense of security that ruined their concentration and made them careless.

Audiences were not impressed by aerialists who fell into safety nets.

Safety nets took away the thrill of live circus performances and made  mockery of terms such as ‘death-defying’ and daredevil’.

In his, four performers space themselves out on the highwire, each wearing a neck holster with a horizontal bar.  Two more performers then climb onto these bars forming the second level of the pyramid, also bearing a horizontal bar. Finally, a girl – originally Karl’s wife, Helen – climbs to onto that bar and balances herself upon it sitting on a regular kitchen chair.

The performers then walked across the high wire maintaining these positions. It’s totally terrifying to watch but even more so when you remember that the original Wallendas did this act with no safety net.

In 1962, almost inevitably, after years of performing this act, the pyramid fell. Two men died. They were Karl’s son-in-law (29) and his nephew (23). His twenty-two year old son was paralyzed for the rest of his life.

There were further tragedies in the lives of the Wallendas but to this day, Karl’s legacy continues. One example:

Balance: A Story of Faith, Family, and Life on the Line

Nik is most probably the most well-known of the Wallendas today. In recent years he has performed the most astonishing feats. You’ll be  familiar, for example, with his walk over the Niagara Falls.

In his book Nik explains much more about the family than was previously known and how important his family life – and his faith – is to him. How can he do the things he does after all the tragedies that have befallen his family?

When Nik was just three years old when he watched the video of the patriarch, his great grandfather, losing his life when he attempted a high wire walk between two tall buildings in Puerto Rico.

You can read more, plus see the video of  Karl’s final and fatal walk here.