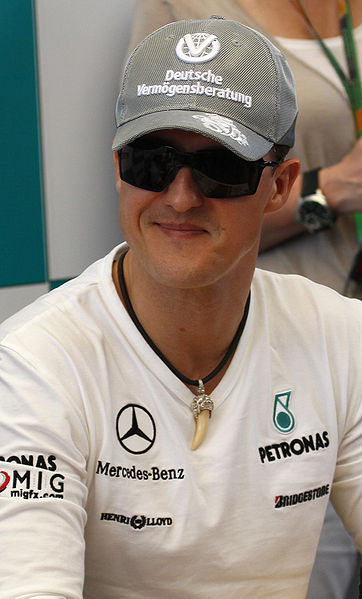 Safety in the world of motorsport has made huge strides in the last few decades. And yet Michael Schumacher, the most successful racing driver of the modern era, is fighting for his life.

But not due to an accident on the track.

On 29 December 2013, having retired from racing, Schumacher was enjoyed one of his favourite sports and was skiing in the French Alps.

He fell and received a serious head injury.

Since then, there has been little news. We know that he was put into an induced coma because of a brain injury. Three months later, we heard that his condition was described as ‘stable’.

His wife and two children visited him constantly. Reporters clamoured to the hospital but his spokeswoman appealed for privacy.  A month after he was described as stable, it was reported that he was having short periods of consciousness and was gradually coming out of the coma.

Another two months went by and the news was that he was conscious and had been moved to a hospital in Switzerland and after another period of several months, that he was now at home.

Over the months, stories appeared that were encouraging; that Michael was showing positive signs and was on the road to recovery. For every one of those that appeared, there was another saying just the opposite.

With no real news to report, the media fed the public’s thirst for knowledge without, I suspect, worrying too much about the validity of their articles.

Michael’s accident is just another example of Formula One drivers who have survived the sport only to be seriously injured or killed in other sports. Didier Pironi comes to mind who died racing a speed boat or Graham Hill who dies piloting his own aircraft.

The last team Michael drove for was the Mercedes AMG Petronas team who in 2014 gave fans one of the best Formula One seasons because of the close rivalry between their two drivers, Nico Rosberg and Lewis Hamilton. (Once again, the media made the most of this rivalry with various unreliable stories being reported.)

But for many of us, as we were watching the on-track battles between the two, the most poignant sight was the simple message on the side of each car:

We have a very special message on our car this week in Jerez. Join the support #KeepFightingMichael pic.twitter.com/hepCGmJUqH