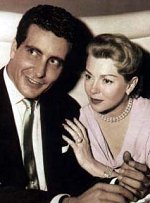 Lana Turner was a Hollywood actress and pin up girl. She had a tempestuous life – she was married eight times – but probably her most famous relationship was that she had with Johnny Stompanato.

Between husbands number four and five, Lana took Johnny to be her lover. He had underworld connections. According to Lana, Johnny was desperate to marry her but she objected to his life on the fringes of the law.

Both were in their thirties – Johnny was four years younger – and Lana had a fourteen year old daughter from her second marriage. Her name was Cheryl Crane.

The seeds of the story were sown in England where Lana was making a film with Sean Connery. Still in the throes of her affair with Johnny, she arranged for him to go to England to be with her. All was well to begin with but the couple were soon arguing. He was particularly suspicious when she wouldn’t let him visit the film set. He became violent and stormed onto the set, brandishing a gun.

In a James Bond manoeuvre, Sean Connery wrested the gun from Stompanato and the outcome was that Johnny was escorted by the police to the airport where he caught a plane back to the States. But that wasn’t the last Lana had heard from him – the tempestuous relationship continued.

On April 4th, 1958  Lana’s neighbours heard a disturbance in her home. Johnny was there are the couple were arguing heatedly. The police were called and Johnny was found sprawled out in the master bedroom –  with fatal knife wounds.

Cheryl had heard the arguments and heard Johnny say ‘I’ll get you if it takes a day, a week or a year. I’ll cut you up. I’ll stomp you and if I can’t do it myself I’ll find someone who can.’

Believing that her mother’s life was in danger, grabbed a ten inch butcher’s knife and saying to her mother ‘you don’t have to take that, Mama’ stabbed Johnny. He died instantly. 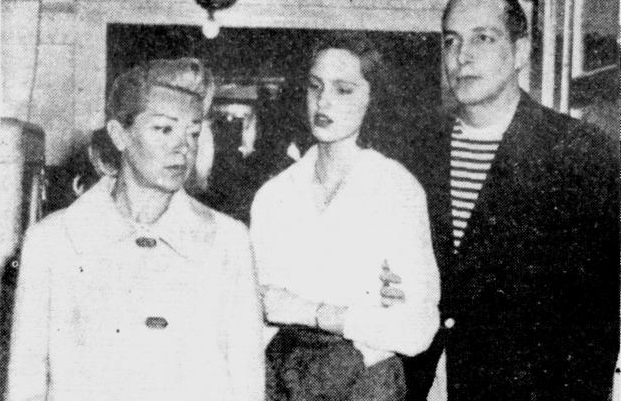 Lana Turner, Cheryl Crane and her father arrive at the police station.

LANA: The Memories, the Myths, the Movies

The police also found Steve Crane at the home. He was Cheryl’s father. He hadn’t been present during the argument or at the time of the stabbing. Cheryl was composed but Lana was almost hysterical – not grieving for her lover but worried about her  fourteen year old daughter.

Cheryl was detained in custody and charged with being ‘under suspicion of murder’.

Ultimately the case was determined to be ‘justifiable homicide’. She was made a ward of court.  Two years later, Cheryl was taken out of school by the authorities and placed in a special school for problem girls. Lana refused to disclose the reason. She was certainly what was referred to ask ‘troubled’ and frequently ran away from the school or disappeared.

She also felt that her mother – and her story – was being exploited by the Hollywood moguls as Lana’s roles after the stabbing of Johnny Stompanato often had her playing the mother of delinquent or difficult teenagers.