This is a film I have watched over and over again – and it’s due for another airing very soon. It’s the most wonderful story; both heart-warming and heart-breaking at the same time. But if that sounds too maudlin, please don’t be put off. It’s immensely entertaining, hugely funny and has the most fabulous music. 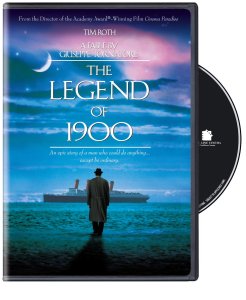 Our narrator throughout the film,and one of its leading characters,is a trumpet player called Max.  He tells us that the story starts on the morning of January 1st, 1900.

On board the Virginian, a New Year’s party had taken place and one of the crew from the boiler room, Danny,  is rummaging in the now-deserted ballroom looking for booty.

Who know? An over-exuberant partygoer might have lost his wallet. A woman might have lost a valuable piece of jewellery whilst dancing. But what he finds is something he least expected.

He discovers an abandoned baby.

Danny decides to bring the boy up, right there in the bowels of the ship. As the boy grows, he never leaves the Virginian and the only life he knows is that aboard the ship, ploughing the ocean between Europe and America.

When the boy, known as 1900, is eight years old the only father he has known, Danny, is killed in an accident. But 1900 remains on the ship.

He turns out to be a child prodigy – a highly gifted pianist.

He eventually joins the ship’s band and becomes a full member of its crew. His music is a phenomenon. But still he has not set foot on dry land. Will he? And what will become of him? As far as the world knows, he doesn’t exist. He has no birth certificate, no passport, no country. What lies in the future for 1900?

See my favourite clip from the Legend of 1900

Max,the narrator of the film, has just joined the ship as a trumpet-player. However, the ship is being tossed by a violent storm. Max is having a hard time with this but 1900, as you would expect,takes it all in his stride – he’s known this all his life.

Enjoy this splendid scene from the movie.