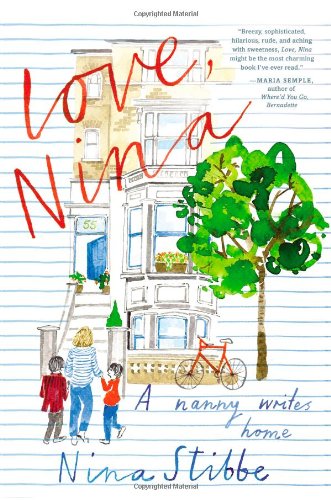 This book didn’t just make me chuckle. It wasn’t the case of a quick chortle. No, this book made me laugh – a lot.

In 1982, Nina Stibbe was twenty years old when she moved to London to work as a nanny. The family she worked for were delightful – and incredibly funny – as were their neighbours and friends.

And Nina wrote letters home to her sister describing it all.

What you might not realise when you start reading this book is exactly who these people are, and that’s a revelation in itself. Nina was actually living with and amongst film directors, literary figures, actors, writers and more.

In her letters, Nina describes her two witty yet down-to-earth charges, Will, then aged nine, and ten year old Sam. What you don’t immediately realise is the Will grew up to be a well-known director,  Sam is an actor (he had and still has the rare Riley-Day syndrome) and their divorced mother, Mary Kay, was the editor of the London Review of Books.

Their neighbour, who comes to the house for dinner most evenings and is referred to as AB, is the wonderful and delightful Alan Bennett.

None of which was interesting to Nina. These were the people she had to live with and deal with on a daily basis.Faithfully she recorded her impressions – and wonderful snatches of dialogue – in her letter to her sister.

You never know what day-to-day life will being in the household. A simple piece of graffiti scrawled on the garden wall reveals…

Nina: I think it’s meant to be  man’s penis.
Mary Kay: I thought it might be heart.
Nina: How?
Mary Kay: An upside down one.
Alan Bennett: Like mine.
(Will goes outside to look)
Nina: People don’t usually draw hearts on walls.
Mary Kay: I might.
Sam: I’d never draw a heart … or the other thing.
Will: (Returning) It’s definitely a dick.
Mary Kay: It looks more like a heart.
Alan Bennett: You’d think they’d label it.

You’ll also meet a variety of Nina’s friends (often other girls who are employed in the area), the boys’ eccentric Russian grandmother, nutty neighbours and more. In the meantime, Nina is trying to improve her literary education by reading Shakespeare and Chaucer…

“The bawdy nurse in Romeo and Juliet isn’t funny, the Wife of Bath isn’t particularly funny, but a photograph of Nunney on the toilet is. Especially when it’s on the windscreen of the Volvo of the literary editor of the Sunday Times.”

This is a hugely enjoyable book. Find out more at Amazon.