US reporter gets it wrong ….. again. Oh dear.

Poor Lucy Pawle. This CNN reporter happened to come across the Gay Pride Parade in London and saw an ISIS flag. Horrified, she immediately reported this to one of the parade’s officials and to a police officer. To her dismay, they were unconcerned. Shock, horror. The inept London police are unconcerned about ISIS.

So she took photographs, called CNN where she and an anchor person discussed this terrible issue. What neither of them noticed however, was that the flag was a mockery of the ISIS flag and featured images of sex toys. You’ve got to laugh……. 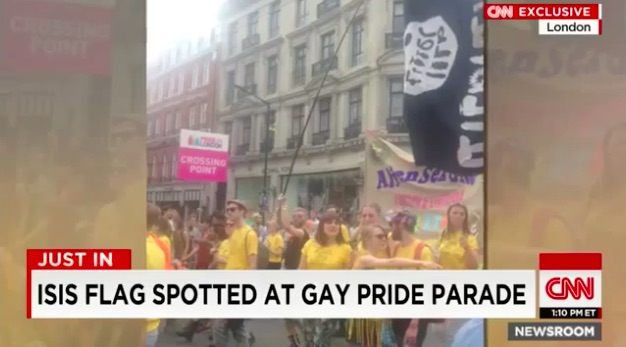 This is, presumably, why the official and the police officer were unconcerned. It is also, presumably, why no-one else out of the thousands of people who saw the flag were concerned. Lucy, in her photograph, looks young. So unless she uses the real estate agent trick of using twenty year old photographs of themselves on their websites, you can imagine a British bobby’s reluctance to explain.

“Well, you see dear. This is a gay parade. That means homosexual. Same-sex relationships. Those aren’t Arabic symbols on that flag; it’s taking the piss. You see, what they are is …… oh, never mind, dear.”

Lucy reported in astonishment on television that no-one else seemed to have noticed the ISIS flag and wasn’t she a clever girl?

No dear, you were the only one who didn’t get it.

When Twitter went crazy talking about her ‘report’ and having a good chuckle about it, she then appeared to compound her cock-up (NPI) by denying that she had reported the ‘ISIS’ flag.

Needless to say, she has since deleted the above tweet. She thought that she was safe in denying her report because CNN had realised that she was jerk (NPI again) and removed the video of her report, which included a serious discussion with the anchor person about the ‘unnerving’ situation, from their website. Again, she demonstrated a wonderful naivety when she failed to realise that there’s no such thing as total delete on the internet. Many people had gleefully uploaded her report to You Tube.

CNN then brought on their national security chap, Peter Bergen. Should something have been done, asks the anchor? Should this man with the flag have been arrested?  What was his motivation? Was it, asks Ms Anchor, a warning? Was this ISIS saying that London was its next target?

The video runs for 6.20 minutes

Some viewers did, and were chuckling at the total idiocy demonstrated by US news media by making a total arse (NPI) of themselves again.

[The video was originally here on this article but all videos of the report have been expunged from You Tube]. 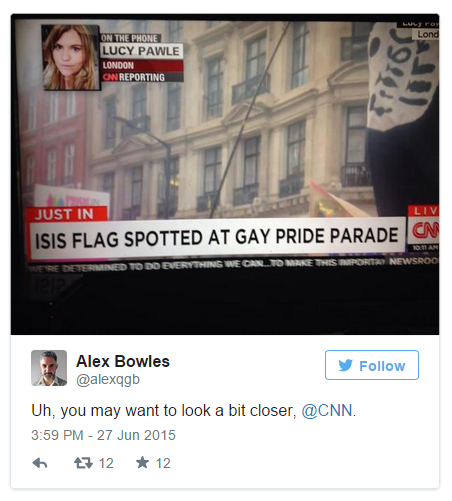 You’d imagine, wouldn’t you, that an ‘international news editor’ would react a little like this.”Oh, an ISIS flag. How strange. At a gay pride parade. Let me take a closer look. Ah, I see.” But no. Instead, let’s give the viewing public the impression that the London police are inept, that ISIS has infiltrated the British gay community and that London is ISIS’ next target. Why not?