Who Was Luigi Musso?

Home » All lifestyle » Who Was Luigi Musso?

Luigi was born in 1924 in Rome and by the time he was thirty years old he had joined the team that was every Italian male’s dream – Scuderia Ferrari. He was following in the footsteps of two Italian drivers who had also driven for the team – Alberto Ascari and Eugenio Castellotti.

Neither Ascari or Castellotti had survived the dangerous world of Formula One racing; Ascari was thirty six when he was killed – Castelloni only twenty six. Once these two Italian heroes were gone, the hopes of the massively loyal Italian race fans rested with Luigi Musso.

But life with the team was a little trickier than he had anticipated. He was one of several drivers and two were British. They were Peter Collins and Mike Hawthorn (who, as a side note was born in Barnsley, Yorkshire – an excellent place). Musso felt that the two Englishmen were ganging up against him.

He claimed that they were convinced that the championship should be won by one or the other of them and had a pact to ensure British victory. He even complained to team owner Enzo Ferrari about it, who assured him that any pacts or agreements would be investigated and put to a stop. 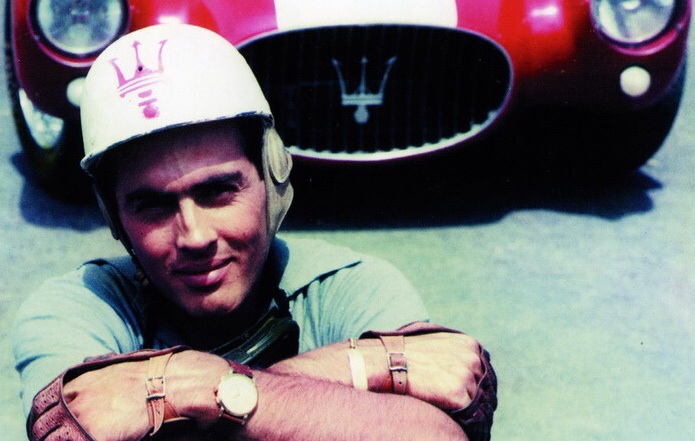 Ferrari himself referred to Luigi as “Italy’s last world-class driver in a long line of stylists”. But Luigi wasn’t always comfortable with the role. Despite driving for arguably the world’s most prestigious race team, he struggled financially.

He had left his wife and two children for a younger woman and this had caused him financial problems. He had tried importing Pontiacs from the USA to Italy without realising that huge American cars were totally unsuitable for rural Italian roads.

Luigi desperately wanted to win this race and not just for the prestige. The race was a very lucrative one. Prior to the race he had a telegram from his business partner in Rome telling him that he must win the race to pay off his debts.

When the race began, Hawthorn took the lead. Luigi Musso was in second place and could already imagine that victory could be his that day. Soon he was only two seconds behind the leader. When they came to a part of the circuit known as the Muizon curve, Hawthorn saw in his mirrors that Luigi was no longer behind him.

He watched with horror as he saw that Luigi’s car, which had gone out of control, was about thirty feet in the air with the driver – who had been thrown out – even higher in the sky. Luigi landed in a wheat field. He was alive but barely.

In the pits his girlfriend. Fiamma Breschi, heard the sound that all racegoers hate, even today; that of the medical helicopter. She rushed to the hospital. Luigi was still alive and she reported that there was not a scratch on him. Believing that he would survive, she returned to their hotel room.

A couple of hours later, there was a knock on the door and she opening it to find a Ferrari manager who told her that Luigi hadn’t made it. Fiamma tried too throw herself out of the hotel window.

Catholic law had meant that Luigi had not been able to divorce his wife to marry Fiamma. This meant that she had no legal rights as a widow. Just before Luigi’s funeral, Signora Musso turned up in Rome where there were ugly scenes.

Signora Musso tried to violently tear off Fiamma’s jewellery – gifts from Luigi. She thought that she had a right to them.

Some time later Fiamma received a letter from Enzo Ferrari himself. He urged her to visit him when she felt that she had recovered from the loss of her lover. She eventually became his mistress.

Fiamma related that shortly after Luigi had died, she chanced to see Collins and Hawthorn who were evidently enjoying a light-hearted moment. She recorded “For a brief moment my hate for those two was stronger than the pain I was feeling. I wanted them dead. Why were they alive and Luigi not? Damned Englishmen.”

Fiamma got her wish

In fact, both the English drivers were devastated by the death of their teammate. Prior to the French Grand Prix they had been discussing ways in which, if at all, they would be able to help Luigi’s financial predicament. Hawthorn’s girlfriend had recently had an illegitimate child and so he had decided that if he won the race, the money would go to the mother of his son.

In August, less than month after Luigi had died, twenty six year old Peter Collins too was killed in a similar accident on the race track.

Mike Hawthorn was was again devastated. He was sure that Luigi’s death was due to the fact that he was driving recklessly because he desperately needed the prize money to pay off his debts. And now, his colleague and friend Peter Collins was also gone.

Hawthorn became the world champion that year but because of the loss of his two colleagues, he immediately retired from racing. Just five months after Collins’ death Hawthorn was driving his road car on a rainy evening and saw and overtook a race team manager friend,  Rob Walker. Moments later, his car clipped a bollard, became out of control and Hawthorn too was killed. He was twenty nine years old.