Man Removed his own Appendix

Home » All society » Man Removed his own Appendix

Leonid Rogozov: The man who removed his own appendix.

Leonid had little choice. He was on a Russian antarctic expedition in the early nineteen sixties when he started feeling abdominal pain. Being a doctor Leonid, who was twenty seven years old at the time, realised that he had appendicitis.

He had to decide what to do. The expedition was many miles from civilisation. The team were not due to be contacted or picked up until the next year. There was no hospital within even remote travelling distance and the team had no doctor – except himself. 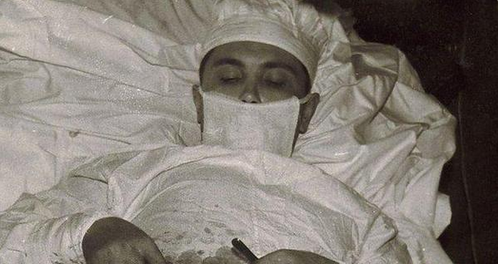 He had no choice. He had performed appendectomies dozens of times, he knew the procedure well. He also knew that if the appendix wasn’t removed, the consequences would be more than just severe pain. Should the dreaded little organ burst, which was often the case, then he would die.

He knew how to remove an appendix. He had the equipment. But could be perform an appendectomy on himself? There was only one way to find out. He thought his task would be impossible but there again, he realised that he had no choice if her was to survive. Despite being in pain, he assembled his inexperienced ‘nursing crew’.

Two men were appointed to put a bright lamp in place and to pass him the instruments he needed. They were also instructed to me sure that a mirror was held firmly in place so that he could see what he was doing. In case either of the two men discovered during that operation that they were squeamish and unable to perform their tasks, backups were available. He even instructed them in emergency procedures should he lose consciousness during the operation and be unable to proceed.

Of course, the huge problem was anesthetic.  Leonid had to keel his mind alert and he had to be fully conscious. For the initial incision, it was easy enough to apply a local anesthetic but for the rest of the operation, we was on his own. The procedure began.

He soon abandoned the idea of the mirror – it simply wasn’t working. He decided to perform the operation largely by feel. This meant that he wore no surgical gloves, opening himself up to the danger of infection.

But it was successful. He nearly lost consciousness on several occasions but he made it. He insisted on the instruments being properly sterilized and that the room should be cleaned before he would relax.

When he saw the appendix, he realised that yes, it would have burst within a day had he not removed it.

But he was back at work, performing his usual duties just two weeks after he had removed his own appendix. Today, some countries insist on explorers who are going to remote areas have appendectomies. Some people also suggest that this should be mandatory for astronauts.

Read more using the ink below.