Book 24 in the Doc Ford Series

Can you imagine how well he knows his characters by this time? Every quirk, every strength—and weakness—must come as naturally as it would if you were writing about family. The same must be true about the Florida setting. He lives where he writes, knowing all the little idiosyncrasies that come with the area.

When you read a book by Randy Wayne White that is one of the first things you notice; the wonderful descriptions of setting and people. This book did that especially well. I was drawn in immediately, often with a feeling of dread about what would come next.

You will find it easy to picture the old house, the pond, with detritus of past decades there among the plants and dirt. The same with the characters, from the old fishing guide, Tootsie, to the evil Ivy and her associates.

Is there a curse on Tootsie’s family or is just a matter of wrong place, wrong time? The fishing guide can show plenty to support his claim for a curse. His family has had too many untimely deaths and mishaps over several generations. How much could be coincidence?

That’s what Doc Ford and his strange but intelligent friend, Tomlinson, are called to resolve this time. A curse. One that goes back to 1925. First they have to manage what is happening in the present before considering a past so far gone. The two have been friends for a long time now. between them they manage to get in—and out— of a variety of dangerous, deadly situations. All with a calm that belies the circumstances.

What will they find? A kidnapped girl, a woman on the run, lionfish, alligators, crocodiles, pythons, swamps, a vicious evil, pictured in your mind so clearly you will be watching where you step. The eeriness of all that amidst a rundown building where they made moonshine. The long abandoned railroad cars that housed Chinese laborers.

It is one twisting, spooky plot. Mr. White takes us deep into Florida, from Sanibel Island to Marco Island, to crimes committed nearly one hundred years ago. While looking for answers that long ago, it always seems to connect in the same place. Past and present, can the same evil still exist as well?

Florida: The Dark side

Florida is the home of a surprising number of authors, and many of those feature quirky characters—just as the state itself includes. So many novels set there reveal the dark side of the state, the smuggling, trafficking, the drugs, the criminal element.

Why there in particular? Surely the same can be found in any state. Maybe it is the sultry climate, the swamps, the lightning sparked storms that lend itself to stories of murder and depravity. Somehow it allows murder to seep into reality. Mr. White’s descriptions take you right there.

Mr. White was one of our featured Florida authors not too long ago.  We hope you will check out the review of his first book that was included in that challenge, Sanibel Flats.

Fans will be delighted with this one. New readers will want to go back and learn more about the marine biologist. Florida lovers will be nodding their heads in agreement. Give it a read. You will enjoy it.

If you’d like to read an excerpt you can find it here. 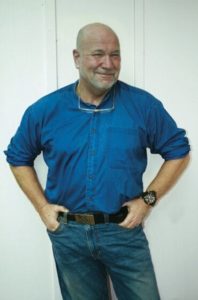 Since leaving home at age 16, and skipping college in the process, New York Times best-selling author Randy Wayne White has been a farm hand, a brass and iron foundry worker, a telephone lineman, and, for thirteen years, a full-time fishing guide at Tarpon Bay Marina on Florida’s Sanibel Island. He has been stabbed, “shot at with intent,” and was in a hotel that got blown up by Shining Path Anarchists in Peru.

As a columnist for Outside magazine he has covered the America’s Cup races in Australia, gone dog sledding in Alaska, searched for wild orangutans on Borneo, brought back refugees from Cuba, been diving in the infamous Bad Blue Hole lake on the desolate Cat Island in the Bahamas, and even participated in a mission to steal back General Manuel Noriega’s bar stools.

Mangrove Lightning is White’s 24th Doc Ford book. He has also had four collections of his columns for Outside magazine and elsewhere published. In 2002, a one-hour documentary film called The Gift of the Game, about Randy’s trip to Cuba to find the remnants of the Little League teams founded by Ernest Hemingway in the days before Castro, won the “Best of the Fest” award from the 2002 Woods Hole Film Festival, then was bought by PBS and broadcast station by station in the spring and summer of 2003.

He lives on Sanibel Island, Florida, where he was a light-tackle fishing guide for many years, and spends much of his free time windsurfing, playing baseball, and hanging out at Doc Ford’s Rum Bar & Grille.

“[A] high-tech, grand-scale adventure. White makes particularly good use of [the] always-potent crime-fiction theme—the knight errant who inadvertently brings trouble home to those he loves. . . . This twenty-third Doc Ford novel will quickly assume its reserved seat on theNew York Times and most other best-seller lists.”
—Booklist (starred review)

“As with every Doc Ford story, the writing is tight and the story fast-paced . . . [Fans of] thriller heroes from James Bond to Jason Bourne will find a lot to like.”
—Associated Press

“A trip to the Gulf Coast with Doc Ford is never dull . . . and White doesn’t skimp on the action. . . . This marine biologist increasingly lets his clandestine life as a government operative take him away from his quiet Sanibel Island home [and White] continues to find fresh ways to bring Ford into the chaos of world politics.”
—South Florida Sun-Sentinel

“White continues to impress with detail and description of the high-tech marvels that have become a part of everyman’s life. . . . Deep Blue is the author at his best. You will want to say ‘He is back,’ but he never left.”
—The Florida Times-Union

I received this book from the author, agent or publisher.