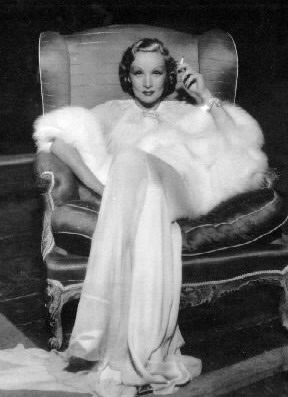 I have a now out-of-print book that studies the lives and style of five famous women. It could be called a history lesson through the eyes of a fashion designer.

One of the five is the fabulous Marlene Dietrich.

She was known for her special style and her fashion innovations – when in Germany in the early years of her career, she once attended an audition wearing a Napoleon hat with a huge feather, a velvet coat and a monocle. (Yes, she got the part).

But where did this sense of style originate?

The first person to influence her clothing was her father. Although he died when she was ten years old, he was a police lieutenant and former cavalry major. He insisted on spotlessly clean clothes, crisp fabrics and highly polished shoes.

Her mother was equally strict with her daughters (Marlene had an elder sister) and impressed upon the girls that a lady never appeared in public without a hat and gloves.

When Marlene’s father died, she lived in a female-dominated household and there were three women in particular who influenced her love of clothes and her style. They were:

Even as an impoverished young actress, Marlene had a suit tailor made for herself. She explained in later life that she always had her clothes created specifically for her because she had broad shoulders and narrow hips – off-the-peg clothing simply wouldn’t work for her.

When Marlene married – before her fame –  her husband to be was initially drawn to her by her matching absinthe-green long gloves and shoes. After their marriage, she daringly – for the time – had her husband’s tailor create a man’s evening suit for her. Male-style clothing plus furs and feathers were to become her trademarks.

When she arrived at the Paramount Studios in Hollywood she was further transformed due to the wishes of the studio. She was told to lose thirty pounds and to have her wisdom teeth taken out to achieve the hollow cheeked look. Her eyebrows were plucked almost away.

For her eye makeup, Dotty Ponedel, who was in charge of the make up department, drew new eyebrows, mascara-ed  her eyelashes and drew a white line on her lower lids to enlarge the eyes. Marlene disliked her nose and Dotty transformed it by drawing a straight line of silver right down the centre to reflect the light.

Happy to lose thirty pounds and have her wisdom teeth extracted, Marlene refused to have her hair dyed. She would only enhance it with a gilding powder that made it appear more blonde on screen.

Marlene began to work closely with Paramount’s head costume designer, Travis Banton. (He had designed Mary Pickford’s wedding dress when she married Douglas Fairbanks). Marlene and Travis worked together designing Marlene’s outfits. She was totally absorbed an would work long into the night.

This was at a time when Hollywood was beginning to influence women’s fashions all over the world.

Who are the other women in the book?

That would be telling. But it’s a pity that the book only features five – there are several others I would include. How about you?

Although the book I mentioned earlier is out-of-print (it was published in 1996) there are still some used copies available at Amazon from time to time, often for mere pennies.

Click on the graphic you see here to see if there are any available right now.