Love and tragedy in occupied France.

In 1941 Marthe Hoffnung was living with her family in occupied France. Life was hard for them. It wasn’t just the hardships of the German occupation that made life so difficult – the Hoffnung family was Jewish. 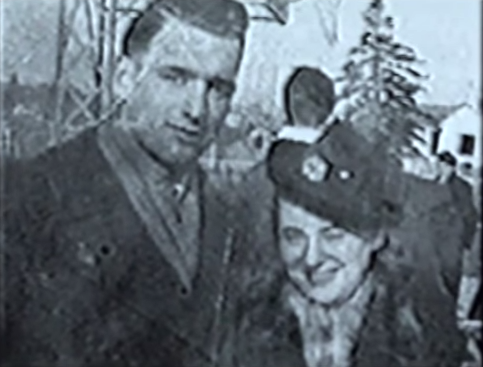 In April that year, Marthe had her twenty first birthday and her parents, who tried to make life as normal as possible for Marthe and her siblings, allowed her to have a small party in their Poitiers apartment. Her sister, Stephanie, who was studying medicine, invited  couple of her fellow students. One was Jacques Delaunay.

In her memoirs, Marthe recalls that Jacque decided, during that first meeting, that she was the girl for him. She was flattered. He was tall and handsome and he danced with no-one else but her that day. Over the following weeks, they fell in love.

The Hoffnung family was actively involved in helping other Jews escape from their occupied area and into the Free France in the south. They would provide shelter, food and clothing plus put the refugees in touch with local farmers who helped them escape to the non-German zone. But Marthe’s sister Stephanie had made a mistake. The Germans became aware that Stephanie was helping refugees and she was arrested. Now the whole family was in danger.

Thanks to friends and forged documents, they were able to escape but now, Marthe and Jacques were apart. But they wrote to each other whenever they could and had fleeting meetings. Jacques was not Jewish and Marthe had forged identity papers without the damning red ‘Juif’ stamp so travel was not impossible.

In July 1943 Jacques was to spend a week in Paris on a course for his medical studies. Marthe decided to risk a visit to Paris too to meet him.

Within minutes of their reunion, it became clear to Marthe that there was something wrong

Jacques took her to a small and quiet café on Boulevard St. Germain. He told her that something had happened. Marthe’s immediate thought was, because of their long separations, that he had found someone else  but he explained that he was in trouble. Marthe at first was simply relieved that the news wasn’t that he had found another girl but he soon enlightened her when she asked him what sort of trouble.

He explained that his brother Marc had encouraged him to help sabotage the occupying Germans. They had formed a small resistance band with three other young men. They hatched a plot to kidnap a man called Michel Guerin who was a Nazi collaborator and violently anti-Jewish.  Their plan went wrong.

Jacques was acting as their lookout when his four colleagues went to kidnap the collaborator. They were armed with coshes but Jacques heard to sound of gunfire and dashed to where his friends were. He found that Guerin had fired the shots and in the meleé that followed, the collaborator had been fatally stabbed. He died in the operating room that night – but after he had told the authorities exactly what had happened.

Marthe told him that he shouldn’t return home to Poitiers. She was appalled at what had happened but she wanted to keep him safe. She suggested he flee south and try to get to Spain where she would join him. He refused. He explained that he couldn’t leave his mother and his brother, Marc. He’d promised Marc that they’d stick together – the two were already wanted for attacking  German supply train. He told Marthe that he would return to Poitiers, say goodbye to his family and then he and Marc would make their way to Spain together.

On the train home he wrote to Marthe. Two more letters followed in quick succession. There were no more.

Marthe was distraught. She decided to take the risky move of phoning Jacque’s aunt in Poitiers. She went to a public call box so that the call wouldn’t be traced. She realised from the guarded reply she received from Jacque’s aunt that he and his colleagues had been arrested.

Jacques, Marc and their three friends were classed as heroes to the French but in prison, they were receiving appalling treatment for their captors. They could no nothing else but tell the truth. That yes, they had killed Guerin but it had been accidental; his death hadn’t been their intention.

When the five were brought to court, their lawyer, Maurice Garçon, succeeded in persuading the judge that the death had been accidental but the fact remained that their intentions had been illegal. Four of the five young men were sent to exile and sentenced to hard labour for life. Jacques, who had been their lookout and not directly involved, was sentenced to twenty years hard labour. Marthe was now in Marseilles but her friend Annette wrote to  her with every detail throughout the hearing and sentencing.

Marthe was relieved that he hadn’t been sentenced to death. Furthermore, he would be in jail for the duration of the war – and safe – then surely he would be released when the war was won.

On October 25th, Marthe was reading the newspaper whilst eating her meagre, rationed breakfast. She saw  headline that read ‘THE FIVE STUDENTS FROM POITIERS’. She read:

‘The German war council announced the summary execution of four of the five students of Poitiers, recently tried for the murder of Dr. Guerin. They were handed by the French authorities to the council on September 24 and condemned to death for  the sabotage of a train carrying German armaments. One was spared and ordered to an indefinite term of imprisonment.’

The paper gave no further details – in particular it didn’t give the name of the one who had been spared. Marthe tried to believe that it was Jacques. He had only been a lookout when Guerin was killed. But she also realised that this sentence was for sabotaging the train and Jacques had played  major role in that. She wrote to her friend, Annette.In between meaningless remarks about friends and soon,she wrote ‘please send me any news of the young patient who has been so seriously ill since the summer’. She had to wait three weeks for a reply. It was:

‘I am very sorry to inform you that the patient you asked about has died’.

On October 6th, twenty one year old Jacques had been lined up with his nineteen year old brother Marc against a wall at the most feared German prison in Paris – Mont Valerien. They were shot by a firing squad and buried in unmarked graves.

Marthe tried hard to join the freedom fighters. She was frustrated because she was a small girl and they didn’t take her seriously.

She was finally helped by the woman would should have become her mother-in-law, Jacque’s mother, Mme. Delaunay. She was respected by the resistance fighters as she had lost both her sons and her husband had been sent to Buchenwald.

When they asked her if there was any way they could help her she said yes, what she wanted was for them to accept Marthe as one of them so that she could fight for her country. She became a spy and travelled behind enemy lines, gathering useful intelligence for the Allies.

At time of writing Marthe is still alive and living in California. You can see her in the video below.