Archibald McIndoe was a pioneer.  During the Second World War, little was known about plastic surgery and yet for the first time, medical staff were seeing men with horrendous burn injuries due to the highly flammable aircraft fuel.

Not only were doctors unsure how to rebuild these badly ‘disfigured’ men, they also had no idea that the person himself needed treatment for more than just physical wounds. Archibald McIndoe changed all that.

Working from the unlikely location of East Grinstead, he realised that a huge problem these young men faced was that of returning to normal life. Yes, he could use his pioneering techniques to make them look less hideous, but what about society? And remember, many of the ‘men’ he treated were still teenagers. The average age of a British pilot during WW2 was twenty. Many were younger. Crewmembers (gunners, navigators and so on) were often younger than the pilots.

Archibald McIndoe revolutionised medicine when it came to plastic surgery but his method of treating the whole person was something that truly made him stand out as a pioneer. 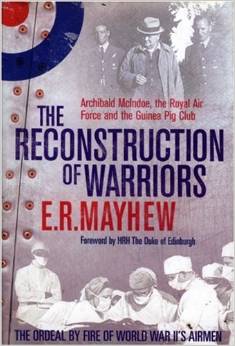 He referred to his patients as his ‘boys’. He insisted that, when at the hospital, they wore their RAF uniforms rather than hospital issue clothing. He arranged for kegs of beer to be permanently available. He organised parties, get-togethers and singalongs.

It’s even said that he chose his nurses on their standard of good looks in order to keep up his boys’ morale.

The work continues. Over the years the Archibald McIndoe Foundation has continued to research and develop new techniques for the improvement and benefits of those who suffer from terrible burns. The foundation treats children and men and women of all ages. In recent years, a large number of these have been British soldiers who have been injured in war zones around the world.

The book you see here tells more about this remarkable man and the work he pioneered. Please use the link below to visit Amazon to see more.

The button below will take you to a detailed article about McIndoe and his Guinea Pig Club (as the men were known) and also gives you the opportunity to donate to the foundation, should you wish.