I Walk A Lonely Street – checking into Heartbreak Hotel

Andy Royston goes down to the end of lonely street in search of a rock and roll ghost.

“Suicide is a permanent solution to a temporary problem” Edna Buchanan 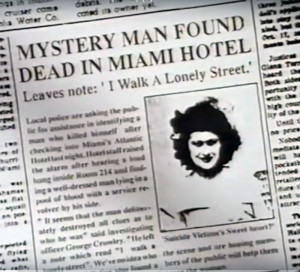 These days it is home to a fancy condominium tower, and at the end is a beautiful beach boardwalk right on the edge of the Atlantic Ocean, beloved of morning joggers and privileged retirees.

Yet if rock and roll stories are to be believed, Elvis Presley partly owes his success to a tragic suicide just steps away from the sands of Miami Beach. Elvis casts a shadow the length of 42nd St., and even in the bright Miami sunshine its hard not to think of the tragedy at the heart of a song.

The story reads like a case from Miami’s legendary crime reporter Edna Buchanan. A tragic suicide in room 214 of the Atlantic Towers Hotel made the front page of the Miami Herald newspaper in 1955. The story was instantly a mystery, and I’m sure Edna would have uncovered more than the hacks who showed up that night. As Edna later wrote, “a Miami death in those days was rare and unusual and would always find its way onto the front page.” 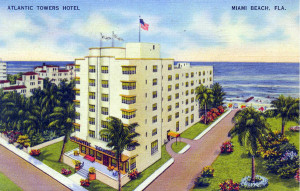 The Atlantic Towers Hotel, demolished in the eighties – possibly the original Heartbreak Hotel.

Later in the Scarface days, a death in a hotel room scarcely warranted a footnote in the Herald. But in ’55, Miami Beach still had some faded glory, and the Atlantic Tower Hotel still had deco appeal. You could walk out of the back of the lobby and be right alongside the glistening swimming pool. You could walk south along the Collins Avenue lined with low rise buildings, restaurants, night clubs and palm trees. You could watch live music at the Olympia Theater and marvel at the newly opened Eden Roc and the Morris Lapidus masterpiece Fontainebleau a stones throw to the north.

Which made the death in room 214 all the more tragic.

The story struck a chord with a steel guitarist from Gainesville, Tommy Durden, who had kept a Miami Herald newspaper cutting with him. He’d read the story that Autumn and he was struck by the short report of a hotel tragedy. The man had destroyed all identifying evidence but for a handwritten note reading “I walk a lonely street.” Durden remembers that the man then leapt to his death from the window, and that local police had put out notices, asking “do you know this man”.

Durden had already tinkered with the line while writing a song, eventually bringing it to the home of Mae Axton, a local promoter and performer to help him complete. Between them they wrote a wonderfully gothic story of a hotel for ‘broken hearted lovers to cry there in the gloom’. A beautifully gloomy passion play set in the deco hotels of Miami Beach, with a weeping bell hop and a desk clerk dressed in black. A kind post-modern  purgatory for the jilted and the heartbroken. 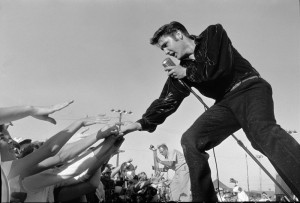 Mae Axton saw an opportunity to present the song to the young Elvis Presley, who she had recently met when promoting his recent show in Jacksonville. She’d already told the singer that she would write his first million seller. Mae made a demo with a local singer, who delivered the song in a pseudo-Elvis style and drove up to Tennessee to present it to Elvis in person.

Just after his 21st birthday the song was recorded, and three weeks later was released, his first on the RCA label, and by the end of April had made number one. The first of 107 singles that Presley placed in the billboard charts in the next 25 years.

In the context of its times – a period when white American popular music comprised crooners, be-bop, hillbilly and swing – Presley’s Heartbreak Hotel is without doubt a weird-sounding record. Faltering, yet utterly assured, sparse but epic, insidious but cathartic, erotically charged yet emotionally claustrophobic. Underscored by a brace of deft, steely guitar chords this lover’s de profundis in all its rallying urgency marks the beginning of an epoch, paradoxically triumphalist. James Peto :  ‘The Heart’

After searches and conversations with Miami Herald historians, it has been widely concluded that this article did not exist, and that the story was an urban legend – although Tommy Durden stood by his story. The cutting, complete with hotel name and room number appeared in a 1973 documentary. – AR