Miracle on the Hudson

Home » All books » Miracle on the Hudson

People all over the world remember the events of January 15th, 2009. But many people have an even greater reason to remember that day – the 155 people who were travelling on a routine flight from New York to Charlotte and their families.

The 150 passengers were a normal mix of ordinary people. The youngest person on board was a babe-in-arms – the eldest was a lady in her eighties, travelling with her daughter. The five members of the crew, two pilots and three cabin crew, were very experienced.

The flight was expected to take about two hours, In reality, it lasted for fewer than six minutes.

The plane had been cleared for take off at 3.24 pm. First Officer Jeffrey Skiles was in charge of the lift off and everything was routine and going well. Less than a minute after they had taken off, the plane reached the altitude of approximately 3000 feet and disaster struck.

The plane hit a huge flock of large birds – Canadian geese -which flew into the two engines, disabling them and causing both to be completely nonfunctional. Many of the passengers saw this happen but all were aware that the engines were no longer working and the plane was losing height.

Captain Sullenberger (known as Sully) took over the controls and radioed La Guardia, the airport they had just left. First Officer Skiles grabbed the emergency procedure (a document of three pages) and began to go through the instructions, checking instruments and going through the precise instructions.

Air traffic control back at La Guardia reacted quickly and cleared a runway for the plane to make an emergency landing. But the airport was now seven miles away and the pilots realised that they didn’t have enough height to make it back.

There was a swift discussion between the captain and air traffic control about the viability of taking the plane to another airport, Teterboro, but this too was too far away. And during this time, the plane was losing height and flying over one of the most densely populated area in the USA.

Sully made a decision. There was only one place that was suitable – even if only remotely – in this urban area. And that was the Hudson River. He decided that he would ditch the plane along its length. He knew that he had only two minutes before the plane lost what little height it had remaining.

No-one inside the plane had any idea what was happening, Sully and Skiles had made their decision and determined their course of action in seconds – there had been no time to inform the passengers or even the cabin crew. But as the plane dropped further he announced to the cabin ‘this is the captain – brace for impact’.

The pilot had an obstacle to avoid before he was able to ditch the plane – the George Washington Bridge – and he negotiated that successfully. Seconds later, when he was sure that the plane was at the right speed, at the right angle and the right height, he ‘landed’ the aircraft on the river.

The cabin crew, who along with the passengers believed that they had reurned to La Guardia, immediately concentrated on evacuating the cabin. Most of us will always remember the photographs of the passengers standing on the wings. 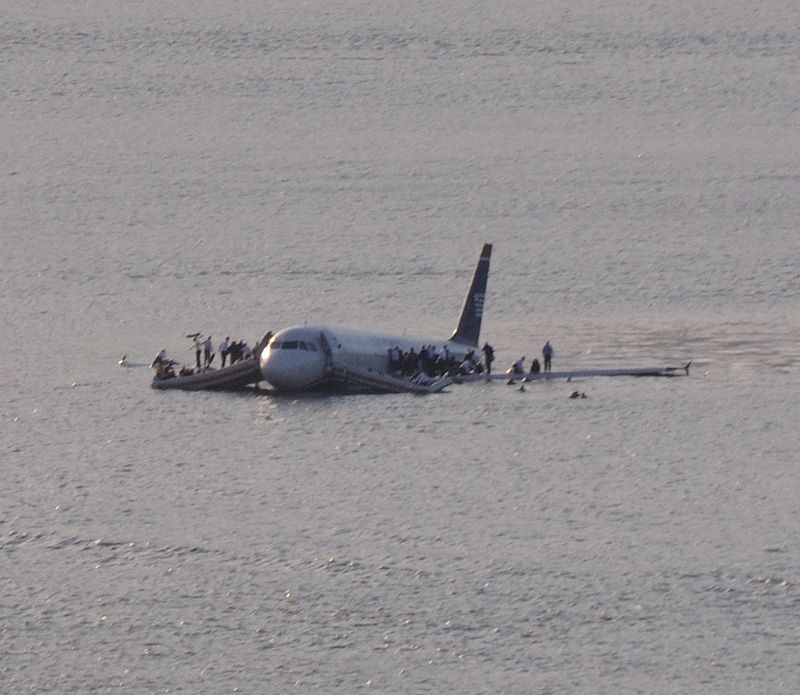 The two pilots assisted with the evacuation and Sully twice walked the length of the now sinking aircraft to ensure that no-one remained inside. Within four minutes the first of several river ferries arrived on the scene and all the passengers and crew were successfully rescued.

What was it like to be a passenger on Flight 1549?

There are so many stories to read about the passengers. What happened to the baby and the other two children who were aboard? How did the lady in her eighties fare? This book tells the human side of this dramatic event.

Some passengers called or texted their loved ones from the plane prior to the ditching, believing that they were going to die. Others did the same when they were evacuated onto the wings. They had survived the crash but would they survive the freezing temperatures. Would the plane explode or would they be dragged down when it sank?

Hundreds of New Yorkers watched the plane come down and the rescue from their apartment buildings or offices and the story soon broke on Twitter. But because the birds strike had happened so soon after takeoff most of the passengers had loved one and family at home who knew nothing about the story that was unfolding. How did they react?

Most of the people who were on board Flight 1549 agree that it was a life-changing event. Was that  positive or not? What happened to those people after the accident?

See the video below and to find out the full story, see details about the book here.