The SS Mohegan sank off the coast of Cornwall in 1898. Although this maritime disaster has been largely forgotten, the cause remains a mystery and of course, there is a conspiracy theory regarding the loss of the ship. And it’s a mysterious story indeed.

The ship was built in the Yorkshire port of Hull. Her original name was Cleopatra and she didn’t get off to a good start. On her maiden voyage, which was from London to New York, various problems were found with the luxury liner. It had been intended that the ship would carry passengers from the United States back to England but she returned without them for urgent repairs.

Once these had taken place, and she was given a clean bill of health she was renamed SS Mohegan, in line with a new company policy.

In October 1898, she set off once more from London to New York. Now carrying passengers, all seemed well. The ship was luxuriously appointed, as was the Titanic several years later. One could say that the Mohegan too was on her maiden voyage when disaster struck as her only previous voyage had been under a different name. Like the Titanic, she was sailing to New York from England. Another similarity is that both ships were owned by American companies but had their headquarters in England; both ships were built in Britain.

On October 14th, she was sailing along the coast of Cornwall. This was dangerous territory for ships as the Cornish coast was notorious for its jagged rocks. However, the captain, a man named Griffiths, was experienced and highly thought of by the shipping line. Of the fifty seven passengers, there was a smattering of the rich and famous. There was an opera singer, bankers and notably, the father of dancer Isadora Duncan with his second wife and their young daughter. (All three members of the Duncan family did not survive the tragedy).

Curiously, as it was in the most treacherous waters off Cornwall, the ship seemed to stray off course. Instead of sailing south into the clearer waters, the ship was heading towards the Cornish coast. This was plainly seen by people on land who were alarmed to see the Mohegan heading towards such dangerous waters. So much so that the coxswain of the Porthoustock lifeboat alerted his crew – he was sure that the ship was heading for disaster. He was right.

A coastguard saw the ship heading towards the land and tried to alert the crew to the danger by firing rockets. These were seemingly ignored. When the crew finally realised the danger they were in it was too late. The ship hit the savage rocks – known as the Manacles – and was dreadfully damaged. Twelve minutes later, only her funnel and the tops of her masts could be seen above water. 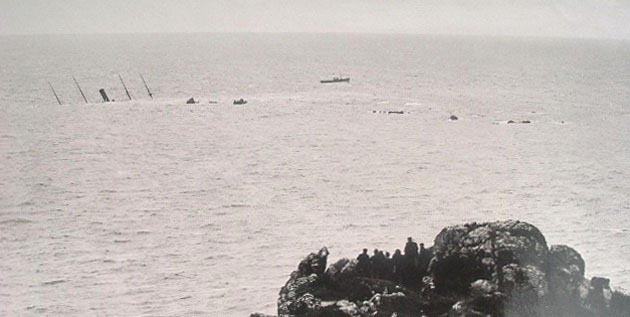 When the Lusitania was torpedoed resulting in her sinking in the First World War, the passengers were at dinner. The same thing was the case with the Mohegan. Just as the Lusitania had difficulty in lowering her lifeboats, so did the Mohegan – only two were used.

There were ninety seven crew members, including the captain and the senior officers. One hundred and six people, including women and children, lost their lives. The Cornish lifeboats leapt into action and there were some remarkable rescues.One man was in the water for seven and a half hours before he was rescued. A young woman clung to the mast for over three hours before help arrived. Some, who were rescued alive, died of their injuries later – before sinking the ship had listed badly to port and then suddenly to the starboard side, causing severe injuries.

Why did the Mohegan veer off course?

The Atlantic Transport Line, 1881-1931: A History with Details on All Ships

We shall probably never know. Not a single officer survived.Anyone who was on the bridge during the last hours of the voyage went down with the ship. Official inquiries afterwards came up with no conclusions about why the ship had been in such dangerous waters. For several hours before the ship hit the rocks, some passengers and crew thought that it was sailing too close to land. (Or so they said later). Captain Griffiths also went down with the ship. Or did he?

Some survivors claimed to have seen the captain go down with the ship in good maritime tradition. But other stories began to emerge. When the first lifeboat was brought ashore, witnesses saw a man leap from it the moment it touched land. He ran quickly into the dark and was never seen again. Was this the captain?

The next rumours to circulate suggested that the shipping line was in financial trouble. Some said that Captain Griffiths held shares in the company. Was the ship damaged deliberately so that the company could receive the insurance money? Had the captain been coerced into sailing the ship on to the treacherous rocks? (It was later deemed that the insurance theory was unlikely because the ship was not insured for its full value).

Several witnesses reported that during the last day of the voyage the captain had looked ill and distracted.

Some time after the wreck of the ship, a body was washed ashore dressed in an officer’s uniform. This was thought by some to be the captain. But the ‘body’ was actually a headless torso. Was this a red herring to make the world believe it was the captain?

Some people believed that Griffiths had started faked his own death and had started a new life.

Because the ship sank in shallow waters, the site is often dived today. Many divers have reported strange happenings when they have been exploring the wreck of the Mohegan.