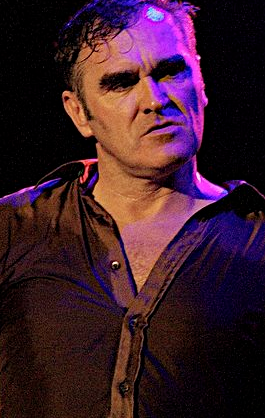 My diet is my life choice and my own business, wouldn’t you say? After all, I wouldn’t want militant carnivores insisting that I eat meat.

But Morrissey (pictured) doesn’t think that way. He believes he has the right to be as militant as he wants regarding vegetarianism. He’s known for it.

His latest escapade came in February 2015 when he insisted that no meat should be served at a venue at which he was due to perform. He refers to the audience eating meat as indulging in their ‘cannibalistic, flesh-eating bloodlust’. (This does not gel with my definition of either cannibalism or bloodlust, by the way).

Are we now going to see the beginning of vegetarian-only concerts? What a slippery slope. Oh,I forgot. I shouldn’t have said that -‘slope’ is a racist word, evidently.

What if he had insisted on no Muslims at his concert? Or no redheads. Or no chocolate lovers?  Are meat-eaters now an undesirable group? Smokers are, after all, so should carnivores be the next group to be ostracised?

Well, it’s a little different. I can understand concert halls, restaurants and other public places banning smoking.  Even people who do smoke don’t want to be sitting in a cloud of fumes. Second-hand smoking and all that … but a hotdog?

If I, as a non meat-eater, was at a concert and a bloke next to me was eating a hotdog, would I be offended? Nope. Every time I eat out, I’m surrounded by people chowing down on steaks. No problem.

Of course, standing up for the issues you believe in can be wonderful. Paul McCartney for example, another vegetarian, is well-known for encouraging people to try to eat less meat – the operative words being ‘encouraging‘, ‘try‘ and ‘less‘. Some people, me included, feel like doing just the opposite when told what to do. If that Morrissey concert had gone ahead, and I was there, I’d feel like breaking the habit of decades and eating a Big Mac. A sort of so-there-don’t-tell-me-what-to-do-gesture.

And speaking of fast food,you may remember that  sixty nine people died in terrorist attacks in Norway in 2011. Morrissey’s comment? ‘That is nothing compared to what happens in McDonald’s and Kentucky Fried [expletive deleted] every day.’

Maybe Morrissey would like me to wear a green triangle on my lapel?  If you eat meat of course, you’ll be required to wear a blood-red star.