Designer and artist Andy Royston looks back on his favourite sounds of 2016 – Part two is all female.

I’m not at all sure what it says about the year’s music that it all came down to “Becky with the good hair”. 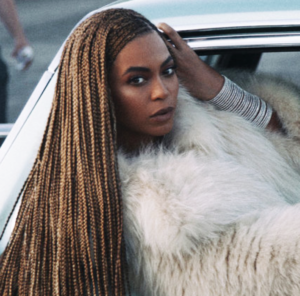 Beyonce’s ‘Lemonade’ has topped all the usual ‘best of’ lists this year including the venerable Rolling Stone Magazine, who called the album “a major personal statement from the most respected and creative artist in the pop game.”

Now Pop’s certainly not my game. I have an aversion to songs that can be played on a kids glockenspiel, needs autotune to hit the notes and has the word ‘sorry’ somewhere in the lyrics. Beyonce and her vast army of collaborators have created quite a ruckus with this one, with some knowing samples (Andy Williams’ Can’t Get Used to Losing You and Isaac Hayes’ Walk On By just two deft pinches) and wide range of musical styles. A well choreographed half-time appearance at the Super Bowl suddenly had one of the weaker tracks – Formation –  instantly adopted as some kind of militant, pro-feminine anthem, even with that clunker of a Red Lobster reference. It’s a fine RnB album, heavy on the drama and sometimes light on the lyrics. Sometimes sweet, sometimes tart. If life hands you a lemon…

My Women of the Year

“The title comes from the German concept of the gläserner bürger, the human or glass citizen. It’s actually a legal term about the level of privacy the individual has in a state, and in health it’s become a term about how much we know about a person’s body or biology or history – if they’re completely made of glass we know everything.” Agnes Obel

Agnes Obel’s third work, Citizen of Glass is a crystal masterpiece; a work of elegance and true beauty. The songs and arrangements are a world away from Beyonce’s furious maelstrom, using old keyboards and classical strings to bring on her perfect snowstorms. My head tells me that this is folk music, but there’s a strong cinematic backdrop to Agnes’s light and versatile vocals. Fans of Kate Bush and Elizabeth Frazer will love the drama and eloquence here, as violins, cellos and keyboards combine to create a work of that’s gentle and tender, yet with a spectral atmosphere. Perfect for a clear winter evening.

“When I go to the cinema that’s what I really like. to be deep in the black and I can imagine so many things. I think it’s luminous too – in the blackness there are all the colours.” Melanie De Biasio

Blackened Cities is just one piece of music, a strong, almost improvised extension of her work last year. In her native Belgium she is compared to Piaf, Billie Holiday or Peggy Lee. The comparison I’d make is Nina Simone or Portishead. The music here is every bit as important as her vocals, which dance across this improvisory jazz/ trip hop jam – with the stunning drums of Dré Pallemaerts driving the darkening mood along.

“I had to do something different. I wanted to feel unnerved, to be slightly unsure of how it was going to go.”  Lisa Hannigan


Rounding off a trio of ethereal European classics I bring you Lisa Hannigan’s gorgeous At Swim, another work that bears comparison with the best work of Kate Bush and Bjork. The music is a collaboration with The National’s Aaron Dessner who also produced another great record this year, Frightened Rabbit’s Painting of a Panic Attack. I must be the only guy in the world who didn’t know that Lisa started out as band member and partner of Damien Rice until the two parted ways around a decade ago.

At Swim has moments of simple elegance that fits in perfectly in with works by Bon Iver, Ray Montagne and Sufjan Stephens. Low key, but never a downer. A bracing walk in fresh mists.

Criticised in some quarters for being pleasant, over charming and hippy-dippy, Lou’s new album continues her campfire unplugged folk sound. To critics and fans alike Lou Rhodes is still cast in the long shadows of work she did as part of trip-hop legends Lamb. Who can fail to have been entranced by her extraordinary work from those days, with epic songs like Gabriel taking the globe by storm.

Theeyesandeye by contrast is gentle, sunlit English folk music, beautifully produced and elegantly realised. Lou’s voice still has that hypnotic quality of old. accompanied by piano, harp and cello, this is a lovely, easy album of music with songs that really get under the skin.

Andra Day  Cheers To The Fall

The themes of the album (are) truth, vulnerability and fearlessness. Lyrically, I say it’s an autobiography told in the form of 13 soul music songs and then there’s a story that’s hopefully healing and encouraging for people. Andra Day, Vibe Magazine interview

OK, I’m cheating here, as this came out at least eighteen months ago. Andra Day was a holiday discovery thanks to her Christmas duet with Stevie Wonder which you can see here and Team USA’s pre-Olympics presser (here). Her glorious album Cheers To The Fall channels soul greats like Etta James and Dina Washington but feels very much at home amongst the nu-soul divas. It’s a great break-up album in the vein of Adele’s 21, or Amy Winehouse’s Back To Black. I’d like her to add a little coyness to the mix – she could pull off a fine Eartha Kitt for instance – but that’s for the future. Cheers To The Fall is a fine old soul set.

Courtney Barnett released an ode to noodles earlier in the year Three Packs A Day, and reminded me why I like a canny lyric. So why didn’t I love Angel Olsen like almost everybody else this year?  Critics darling, My Woman has been compared to Patti Smith in her Horses period. FFS. All I hear on My Woman are late night karaoke love songs – Lana Del Ray sings Roy Orbison with a bottle of Knob Creek.

Much more fun is Haley Bonar, whose guitar based dream-pop brings back memories of the 4AD stable – Kim Deal, Tanya Donnelly and Kristin Hersh. One of Bonar’s previous projects was once described as a “no-wave, new wave, punkish kind of thing that sounds like the Twin Peaks High School prom band.” which sounds about right. Her classy album Impossible Dream is the kind of laid back Americana that Tom Petty and Maria McKee used to be capable of, but drenched in a psychedelic haze.

Toughest chew of this year was Emily’s D+Evolution by Esperanza Spalding. Pitchfork memorably (and accurately) described this as Joni Mitchell fronting Yes. This is what’s best described as a long listen, so I’ll be back next year to let you know if it’s still on rotation. A more conventional soul jazz set came out on BlueNote from Kandace Springs. Called Soul Eyes, this Prince protege has is maturing into the missing link between Norah Jones and Cassandra Wilson.

Re-release of the Year

“I was never in the traditional clan – I was in the layabout section with Bert Jansch and John Renbourn and all that lot. I’m not ashamed of any of my records. Some of them are really good, and I’m surprised they haven’t sold more than they have. They haven’t done bad, but I feel they deserved to be more successful. I feel it’s a style of music of its own. I’ve never consciously copied anybody.” Sandy Denny, Melody Maker, 1977

Despite Judy Collins covering Who Knows Where The Time Goes Sandy Denny never came close to achieving the fame of her American and Canadian contemporaries like Joni Mitchell and James Taylor. Part of that was down to her music being played in electric folk bands rather than stripped down and intimate as presented here. This collection of double-CD of demos, rare live recordings and BBC session tracks really works well,  as a reviewer at Amazon wrote: “forever young. Forever timeless, telling tales of life with all its joys and sorrows, heartbreak and just plain fun.”