Home » All books » Review: My Man Jeeves by P.G. Wodehouse 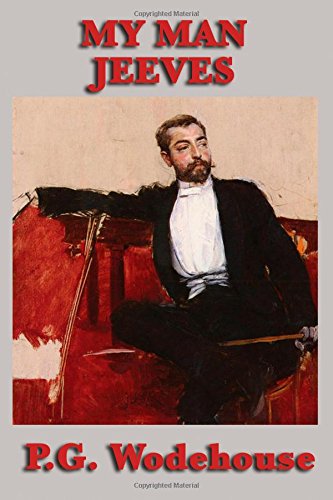 Jeeves is recommending the novels of Rosie M. Banks to the young master and describes them as ‘light, attractive reading’.

If you’re on the lookout for ‘light, attractive reading’ and something that will invariably make you chuckle,then I recommend My Man Jeeves

by P.G Wodehouse;one of the famed Jeeves and Wooster series.

Each chapter is a short story in itself so is ideal for dipping into at any time.

In this book, the pair are living in New York. Bertie Wooster’s formidable Aunt Augusta had sent him over to the States to prevent his cousin Gussie from marrying a chorus girl.

Not only did Bertie fail miserably in his mission, Gussie went on to tread the boards himself. Fearing the wrath of his Aunt Augusta, if he returned to England, Bertie thought it wise to stay in New York for a spell until things back home had calmed down.

He sent Jeeves out to find a suitable apartment, joined various gentlemen’s clubs, was introduced to the young society set and settled down comfortably for his sojourn.

The problem was that Bertie,impressionable at the best of times,was prone to following fashion – American fashion – of which Jeeves wholeheartedly disapproved.

Each short story in the book, in its early stages,describes some new fashion that Bertie has adopted. It might be a luridly coloured tie, an unsuitable hats, you name it. If Jeeves doesn’t deem it fit for a young Englishman from the upper crust then it’s going to have to go.

But here’s the next problem. Bertie and his friends simply will find themselves embroiled in  variety of awkward situations and not one of them has the brainpower to disentangle themselves without Jeeves’ assistance.

But Jeeves has his price. There is an unspoken agreement that if Jeeves devises a scheme to get Bertie or his companions out of the soup, Bertie’s latest fashion fad will be required to bite the dust.

Reading about the machinations of Bertie’s plans that always go wrong, and Jeeves’ schemes that disentangle him from his scrapes is sure to raise a smile.