A teenage Andy Royston picked up a copy of The Autobiography of Malcolm X and it made a huge impression. Almost 40 years later, and now living in Florida, he revisits the book to figure out if it still impresses.

“Malcolm X’s autobiography seemed to offer something different. His repeated acts of self-creation spoke to me; the blunt poetry of his words, his unadorned insistence on respect, promised a new and uncompromising order, martial in its discipline, forged through sheer force of will.” Barack Obama

My introduction to Malcolm X came at a store called Grass Roots, a shady basement bookshop in Manchester that sold all manner of radical stuff. I was working my way through the maverick shelves at the back where books by the likes of Emma Goldman and Herbert Read were stacked. I’d been turned on to anarchist and pacifist ideas after attending shows by punk band Crass so visits here were getting pretty regular. 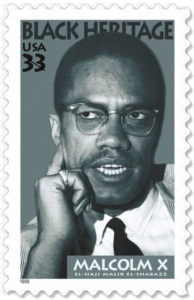 I soon tired of punk rock sloganeering and dodgy old copies of Freedom and  Black Flag. It was time for something new.

Then, as now, books on race relations were gathered together with black writers of all kinds. You’d get ‘Crisis In Black and White’ alongside ‘Cotton Comes to Harlem‘. There, Alice Walker rubbed alongside Zora Neale Hurston and John Edgar Wideman. Before long I found myself browsing books on Martin Luther King, American Civil Rights and the Black Power movement. My head was about to be turned.

Admission. My knowledge of American race relations was tainted by bad Hollywood – Gone With The Wind and assorted musicals and civil war dramas – and ageing stories like Uncle Tom’s Cabin. This was countered by Blaxploitation movies, TV cop shows, pulp novels and detective noirs. The music of Ray Charles, Paul Robeson (a hero due to his work with coal miners) and James Brown had played a part too, but reading about Dr. Martin Luther King, the Selma protests and Freedom Summer put matters into sharper perspective. 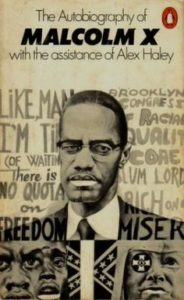 The Autobiography of Malcolm X: As Told to Alex Haley (Click image to buy)

The cover of The Autobiography of Malcolm X (Penguin paperback edition) stood out as something different from the rest. I picked it up and read…

It was the tone of voice that made me walk out with this riveting book into the Manchester rain. Its opening pages read like Chandler or James Ellroy. A breezy ride from Omaha, Nebraska to the heart of Jazz Harlem; then on to Boston’s Charlestown State Prison and a conversion to hard core Nation of Islam doctrines.

Helped along by Alex Haley’s easy prose Malcolm X comes across as a man of huge moral principle, determination, and confidence – a man who wanted justice. I also recognised what the English would call wind-up – an ability to say provocative things to unnerve and confuse his enemies. But most of all he was angry as hell, and had every right to be. 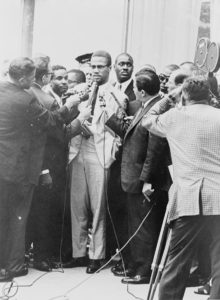 Even within the context of segregated American life in the 1960s, he’d seen the very worst of Jim Crow America. His preacher father was murdered, and his mother moved in and out of the insane asylum.

These were fearful times – a man who stood up to defend his family and property could easily get into serious trouble. Men who carried every bit as much fire and brimstone as Malcolm most likely were beaten down and silenced. Malcolm X, though, emerged just as news television found its way into American homes, and he quickly became notorious and controversial.

One phrase he used a lot was “the so-called negro”. Here was a word that had become so engrained into American life it was eye-opening to hear this challenge to the implicitly accepted racial order.

Almost thirty years later writers like Ta-Nehisi Coates still challenge this. In ‘Between The World and Me’  Coates observes that “Americans believe in the reality of ‘race’ as a defined, indubitable feature of the modern world. Racism – the need to ascribe bone-deep features to people and then humiliate, reduce and destroy them – inevitably follows from this inalterable condition”. Malcolm X never shied from challenging this idea of the ‘negro’ and revelled in making the ‘white devil’ uncomfortable in their beliefs. It’s a matter of deep shame that the so-called white race hasn’t very far from this way of thinking. 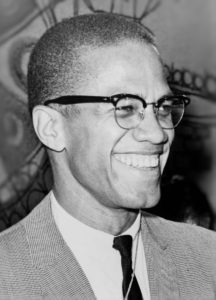 Reading on I began to see Malcolm X as an heroic American figure – He was Gary Cooper at High Noon, Allan Ladd’s Shane or John Wayne in The Searchers. His belief in liberty; his belief that he had a right to use any means necessary to get it, and that defending that freedom is, well, an unalienable right, seemed so very American to me. White guys had been talking this way for years.

Malcolm ideals were woven into the Bill of Rights and the Constitution – his race-bating methods were tough and counterproductive sometimes but his aim was true. Justice was right there, written into the fabric of American history. All he was asking for is for American to deliver on its promises. As Ta-Nehisi Coates said, Malcolm spoke like a man who was free.

The story of Malcolm X’s journey of self discovery through study and exploration was a big inspiration and remains so. He was intelligent, self-controlled and fearless. Putting down this wonderful book makes me wonder what kind of a figure that Malcolm, or El-Hajj Malik El-Shabazz, would have become. His death in 1965 through assassination took away our chance to see what kind of a leader he would be. In America’s history books he transcends the legends and ‘firsts’. He remains a singular inspiration.

“Malcolm said to get up off your knees and fight your own battles. That’s the way to win back self-respect. That’s the way to make the white man respect you. And if he won’t let you live like a man, he certainly won’t keep you from dying like one!”
Ossie Davis

Race relations in England felt very different than that of the US, then as now. American culture seemed to be everywhere, but U.S. politics remain a world away. In 1980 Afro-Caribbeans were far more focussed on the rise of the National Front and the British Movement at home, and South African Apartheid abroad. Although a new wave of inner city violence was close to erupting in England’s inner cities I’m not at all sure that Malcolm X, or even the American Black Power movement had much influence here. In Manchester, and Moss Side in particular, the injustice of police tactics (particular the “sus” stop-and-search laws that riled so many black communities) had much more impact.

Reading the book again thirty years on, I’m struck by the challenge it posed to non-violence and pacifism. In the face of provocation, how would I react? Would I turn the other cheek like Dr. King? Or take an eye for an eye, like Malcolm?

The Autobiography of Malcolm X served to throw new light on my personal understanding of race and racism, and also matters of non-violence and self-defence. Was Malcolm a pro-violent, anti-white demagogue and a threat to race relations? He was certainly a challenge to my own way of thinking, as I profoundly disagreed with much of his thoughts and pronouncements. He crucially introduced me to the idea of pan-Africanism, something I knew of from my love of roots reggae music.

From here my reading moved on to other challenging African-American writers; to Maya Angelou, W.E.B. Du Bois, Zora Neal Huston and to my ultimate favourite, James Baldwin. My eyes had been opened – The Autobiography of Malcolm X started a lifelong literary journey that I’m still earnestly travelling along.

Below: A hip hop piece composed by American drummer Keith LeBlanc under the moniker Malcolm X, released in November 1983 on Tommy Boy Records