All the six Mitford sisters were fascinating and that fascination hasn’t waned over the years. When the sisters were young, they  were rarely out of the newspapers.

Throughout their lives they attracted stories and scandal. One thing they all had in common was a sense of humour – and Nancy in particular.

But hers was  a mildly cruel wit and this made her much-loved books even more successful. But what was Nancy really like?

The six sisters – they had one brother also- were born to Baron Redesdale and his wife in the early part of the twentieth century.

This means that their lives span a fascinating era which includes the Jazz Age, the Second World War and the Space Age. Nancy, the eldest, was born in 1904 and lived until 1973.

Of the sisters, three had long-lasting marriages but Nancy wasn’t one of them.

As a young woman, she was crazy about a chap named Hamish Erskine. The book you see here contains extracts from many of Nancy’s letters and her devotion to him is evident within them. So is her unhappiness when he told  her he was marrying someone else. 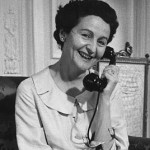 Nancy was married when she was thirty. Her husband,Peter Rodd was not a stable character and the marriage soon was on the rocks. Once again, we are given insights into this from Nancy’s letters in which she pours out her heart – but often with a tinge of her characteristic humour.

However, she did fall madly in love. During the Second World War she met Gaston Palewski, a French colonel who was to become the love of her life. Their affair was intense to begin with but with the war and his commitments,they could not be together as much as Nancy (in particular) wanted. Again, her letters reflect this.

After the war, she moved permanently to Paris to be with him, but their meetings were not regular. Eventually,when he was posted abroad, they dwindled away to once a year. Nancy channeled her energies into her writing. Her books were largely autobiographical, but under the guise of being novels.

She did not write a proper autobiography but Selina Hastings has, in the words of one reviewer,’written a book that Nancy Mitford would have been proud to write herself’. This is largely thanks to having access to Nancy’s huge correspondence and Nancy’s own voice shines through the book as we move with her through times gone by and an era that was so different to our own – but endlessly fascinating.