If you’re familiar with Charlotte Bronte’s Shirley, then you know Oakwell Hall. For Oakwell, a place she knew well, became the house ‘Fairfield’ in the novel.

In the 1840s,Oakwell in Yorkshire was a school for girls. It was due to her friendship with one of the students there, Ellen Nussey, that Charlotte Bronte came to know the hall. But the building is much older than that. 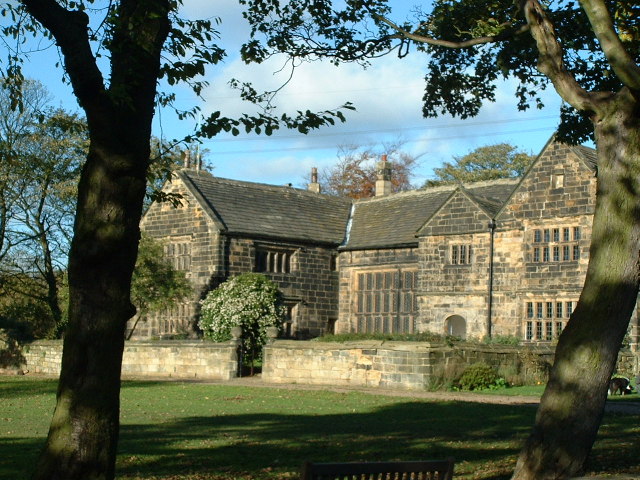 If you visit the hall, you’ll see above the entrance, that the date 1583 is inscribed there. Studies have shown though that an even earlier timber building occupied the land.

Also above the door, are the initial J.B. these refer to John Batt, who was responsible for the building we see today. He was a wealthy man from the nearby Halifax area and the family were considered to be slightly disreputable due to some of their business dealings. The house eventually was passed down to his son,also named John who, during the Civil War, was asked to pay a proportion of the value of the property to support the Royalist faction.

This led him to move to the United States at some time in the late 1640s. It’s thought he went to Virginia so if your last name is Batt and your ancestors are Virginians, the hall you see above may well be your ancestral home. Check your genealogy files – it’s thought he died in 1652.

His grandson, William, eventually inherited the hall from his father and he was killed in a duel in London in 1684. It’s said that at the very moment he was killed, a bloody footprint magically appeared in the hall. That’s because, although he was known to be away from Yorkshire and in London, he was seen walking along the lane to the hall,entering it and then going up the stairs to his own room whereupon he disappeared. Spooky indeed. If you visit the hall, do watch out for him – he reputedly still lingers.

Over the years, the property left the Batt family and had several owners, often absentee landlords.  In the early part of the twentieth century, there was a rumour that the building had been sold to a US buyer. They said that it was going to be dismantled and reassembled, brick by brick, in the States. Eventually it was saved by public subscription and became the property of the local council.

You can see the interior of the hall in the video below. Please scroll down for visitor information – and remember to watch out for William Batt 🙂