Who Was Ottoline Morrell?

Home » All society » Who Was Ottoline Morrell?

The curious life of Ottoline Morrell. 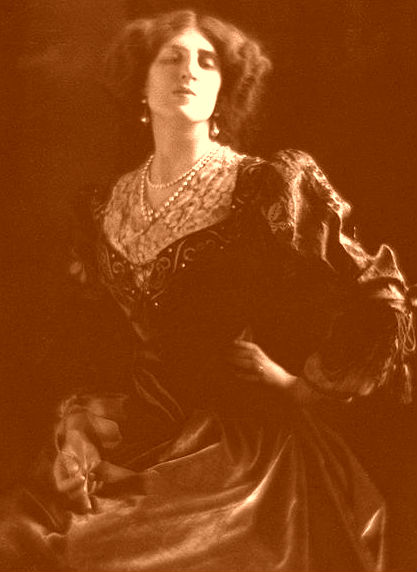 Who was Ottoline Morrell?

When Ottoline Morrell grew to womanhood, she was six feet tall. She had striking, flowing red hair and a strongly-featured face.

Knowing that she would turn heads, she dressed flamboyantly. She also led a flamboyant and somewhat scandalous life.

She was also the sort of woman that was often caricatured – even by her several lovers.

She was born in 1873 into an aristocratic English family of distinction. She became a patron of the arts and a huge influencer of painters and writers – without being a creator herself.

Although, it could be said that she created herself.She was far from looking the way that a well-bred young lady should have looked in those days and she accentuated the difference. Despite being so tall,for example, she would wear high-heeled shoes and even use special elevators to make herself even taller – she had no intention of being ignored.

She married when she was almost thirty but prior to that, she had enjoyed a long-standing affair with an older man, a Swedish doctor and writer, Axel Munthe. They spent time together on Capri and she was very much in love with him but she tried to convert him to her own beliefs. This, combined with the fact that he realised that she wasn’t an heiress, caused him to end the relationship.

Even on her honeymoon she realised that her married relationship was going to be, as she later wrote ‘like brother and sister’ but nevertheless she became pregnant and gave birth to twins. Ottaline though wanted approval. The girl survived but the boy died. It’s said that this was the reason why her husband started having affairs – he had badly wanted a son. His choice of mistresses was unfortunate because his mistresses were often women who worked for Ottoline – her maid, her secretary and so on. Astonishingly, she cared for these children-paying for their education, buying them gifts and generally looking after their wellbeing.

So she too embarked on a series of affairs (with, it’s thought, both men and women). Most of her lovers were part of the artistic circle at the time, the Bloomsbury Set of which Ottoline was a prominent part.

She entertained them lavishly. They would avail themselves of her hospitality and even her bed but for some reason, they would then ridicule her behind her back.

Amongst her lovers were Augustus John, Henry Lamb,  and Bertrand Russell but her true passion was for a much younger man called Lionel Gonne. Lionel, who Ottoline called ‘Tiger’ was a bisexual stonemason who was working at her country home. This, it’s said, was the first person towards whom she felt true passion. But while Ottoline and her daughter were abroad, he became ill.He died in her arms. It’s said that D.H Lawrence modelled the gamekeeper Mellors (and his activities) on Lionel Gomme in Lady Chatterley’s Lover. The fearsome character of Hermione in Women in Love (played so wonderfully by Eleanor Bron in the film) was a caricature of Ottoline.

Ottoline suffered ill health throughout her life.She had a severe form of psoriasis which meant that, at times of stress when it was at its worst, she had to be bandaged and hidden away. As she grew older, she became almost completely deaf. She developed a horrible disease of the jaw – a type of bone cancer – which meant that her jawbone was literally eaten away. She developed the habit of wearing motoring veils around the bottom part of her face.

She was only sixty four when she died. She attended a clinic belonging to a Doctor Cameron in 1938. He injected her with a drug that was at that time experimental, Prontocil. He gave her twice the dosage required and this was enough to kill her. The following year, the doctor took his own life in remorse.