Looking at Paintings (3): ‘The Emigrant Ship’

Home » All style » Looking at Paintings (3): ‘The Emigrant Ship’

This is the third in my ‘Looking at Paintings’ series of articles.

This painting is titled ‘The Emigrant Ship’ by the Yorkshire artist, Charles Joseph Staniland, and is exhibited at the Cartwright Hall Art Gallery, Bradford.

Each group of people in the painting has a story to tell – or perhaps gives us the opportunity to tell it for them. 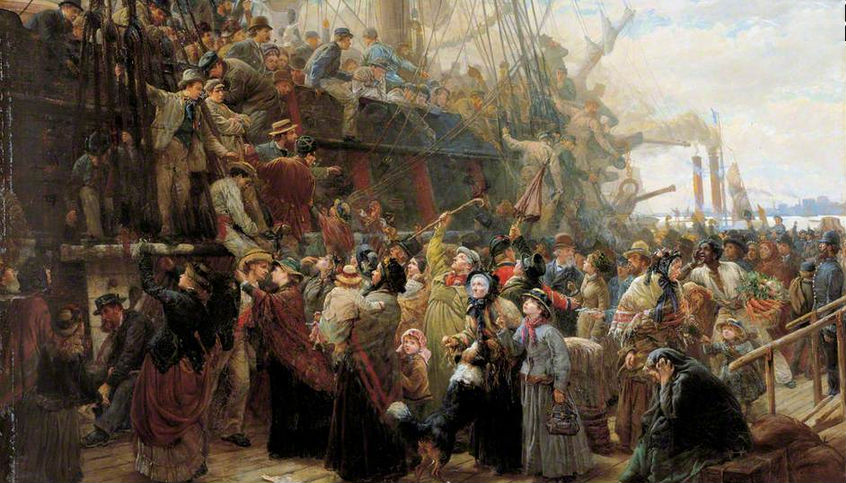 ‘The Emigrant Ship’, was painted in the 1880s by the Yorkshire artist, Charles Josepth Staniland, and can be found at the Cartwright Hall Art Gallery in Lister Park, just outside the city of Bradford, West Yorkshire. It is an oil painting on quite a large canvas, measuring 104 x 176 cm, and is very popular with visitors to the gallery.

It is full of human interest and depicts the emigration of people from Britain to English speaking countries overseas – particularly America, Canada, Australia and New Zealand – with all searching for a better life, and for many, an escape from unemployment or low pay.

However, the main point of interest for us, the observers, are the people who stand and watch their loved ones go.

Our eyes are drawn to the groups and individuals at the centre of the painting. We see assembled women, children and one old man – a shepherd waving his crock toward the brow of the ship; a sheepdog leaps up to the older woman next to him. A young girl, possibly a sister, or even daughter of the person departing, points upward, seemingly identifying someone on the ship.

An older woman sits clasping her head in her hands, seemingly in a despairing state.

Another woman, with two young children, looks up at the ship. One of the children turns to look in the direction of where the artist is seemingly positioned. This gives a naturalistic sense to the painting – as if the artist was really there, painting the live scene, witnessed by the child. However, it is likely that the artist would have compiled this work from a collection of sketches made over a period of time in different places, and using models posing in a studio.

A young woman kisses a sailor – it will be months before they will be reunited, assuming a safe passage there and back.

Other individual figures stand out: a well-dressed woman stands by herself to the left of centre; a Black woman, hawking carrots, calls out her wares – fresh fruit and vegetables will be on short supply during the voyage; a police officer stands supervising the scene.

All social classes are represented in the picture. All have a story to tell, and the popularity of this style of narrative painting was that it gave full opportunity to the observer to provide one for each character.

But the overall impression from the scene is of expectant excitement on board, mingled with bafflement and sorrow onshore at the loss of loved ones to lands far from England. 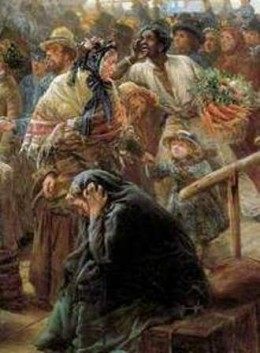 The painting was completed in the late 1880s; a time when emigration from England reached a peak. The main ports of embarkation were London, Liverpool, Bristol and Hull. The artist was born in Hull so it may be that this is such a scene remembered from his time growing up in the city.

Industrialisation had badly affected work opportunities in the countryside, and even in the cities finding well-paid work could be difficult, or promotion slow. Rural workers found it increasingly hard to survive on the low wages paid to them, and emigration offered a promise of finding work on farms in the ‘new’ countries.

The agricultural clothes of the old man, woman and child at the centre of the painting, and the sheepdog, suggests that a young man, probably a son, from a village was leaving in search of work overseas. This was not uncommon. Between 1860-1900, it is estimated that 1.5 million farm workers emigrated from Britain to work on farms overseas – where generally they found a better standard of living, and a less class divided society.

The fashionable clothes of the lone woman in the painting reminds us though, that all social classes and professions emigrated. But a man might often go out alone at first to establish a home before calling wives or other younger relatives to join him. However, for older people it was often the last time they would see a son. Perhaps the woman, head in hands, knows this.

The smoke in the background reminds us that the boat and its passengers will soon drift away too, until it vanishes on the horizon. Young men and women will be lost to England. 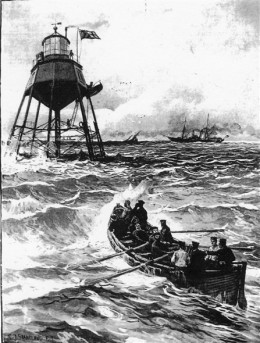 Charles Joseph Staniland (1838-1916) was born in Hull and studied fine art at the Birmingham and at the Royal Academy in London.

He specialised in painting historical subjects in oils and watercolours and was a popular artist of his time, exhibiting his work across England. He made a good living from painting genre and narrative scenes and from his illustrations for popular magazines of the day, including The Illustrated London News and The Graphic. Nautical scenes featured in the range of work he produced.