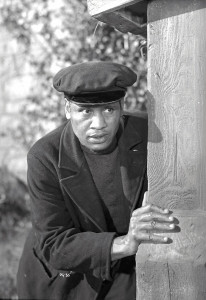 As the shadows of World War II were beginning to cast long shadows over London, Ealing Studios were beginning an ambitious new film. It was shot partly in the coal mining region of South Wales, and adapted the story of a black miner from West Virginia who drifted to Wales by way of England, searching for work.

It documented the hard realities of Welsh coal miners’ lives and at the same time created a role that its star, legendary baritone, actor and activist Paul Robeson, could be proud of. It was, he told a Scottish newspaper, an opportunity to “depict the Negro as he really is—not the caricature he is always represented to be on the screen.”

The film was a politically radical story even by today’s standards, tackling the difficult issue of coal pit closures – one that continued to resonate throughout the British coalfields throughout the century and made the film relevent to generations of mineworkers who faced the similar closure programmes decades on.

It was noteably sympathetic towards the plight of the miners, and also the crucial role that the coal industry played in mobilizing the populace for the coming war, which broke out as the film was reaching its final weeks of shooting. The producers even re-worked the ending to reflect this.

It also dealt bluntly with racism – At one point in the movie a group of workers complain about David’s (Robeson’ character) position in the mine and in the choir. “This fellow brought a black man to work down the pit…” “Well?!?” booms a voice from off-camera. “What about it?” In a close-up you see Robeson hang his head and stoop his shoulders, showing his emotional pain at the slight. But in the singing there’s a complete solidarity amongst the men which echoes the theme of the movie. 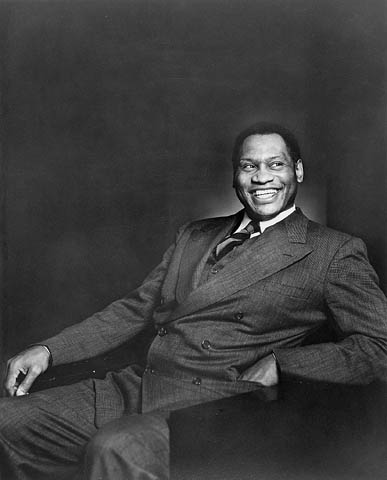 In taking on this role he was fulfilling the promise that emerged in his early days as an actor in the West End of London where he starred in the production of Show Boat at the Drury Lane Theater back in 1928.

It was there that he met a group of unemployed miners who had marched to London to draw attention to the hardship and suffering endured by thousands of miners and their families in South Wales. He was drawn by their singing and began a friendship with the Welsh miners that endured for decades. In the next ten years he’d donate money to and visit the Talygarn Miners’ Rest Home and would sing in various towns including Cardiff, Neath and Swansea – once, in Caernarvon, he appeared the day after 266 miners lost their lives in nearby Gresford.

In 1938, he famously sang at the the Welsh International Brigades Memorial at Mountain Ash to commemorate the 33 Welshmen who had died in the Spain civil war, telling the audience “I am here because I know that these fellows fought not only for me but for the whole world. I feel it is my duty to be here.”

Robeson’s big hearted personality shines through the movie where crowds harmonize and ashen-faced miners burst into song. But there were tensions on the set, as war approached.

By September skies were full of barriage balloons. Anti-aircraft guns were being hastily constructed on building tops and sand-bags were being piled against windows. Paul’s trips out to the studios at Ealing became more and more exhausting. Air raid precautions and blackouts delayed things, until, on September 25th the film was complete. Robeson and his wife headed back to New York via Bordeaux on the SS Washington, which was booked to capacity with passengers fleeing, for fear of being stranded. 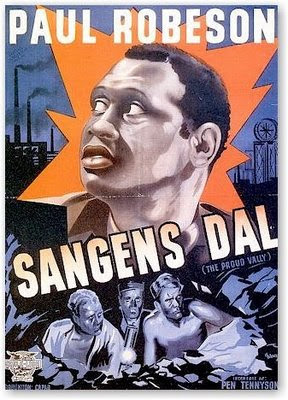 Back in Wales the coal miners were being conscripted into the army by a government that underestimated the value of the experienced miners in the effort to ‘keep the home fires burning’. In just a few short years the mines had lost over 30,000 workers and they proved difficult to replace until the Minister of Labour created the famous “Bevin Boys” to keep the coal mines working.

“We need 720,000 men continuously employed in this industry. This is where you boys come in. Our fighting men will not be able to achieve their purpose unless we get an adequate supply of coal.” Ernest Bevin, Minister of Labour and National Service

The Bevin Boys were given six weeks of training for work that was typical coal mining, marching a mile or more down dark, dank tunnels, with not much more than helmets and steel-capped safety boots.

Paul Robeson’s impact upon the mining families (and they on him) was huge. Each year between 1952 and 1957 Robeson was invited to sing at the Miners’ Eisteddfod  back in Wales but could not attend.  His passport had been revoked from 1950 to 1958 under the McCarran Act. He remained under surveillance by the U.S. FBI and CIA agencies and by British MI5 for well over three decades until his death in 1976. 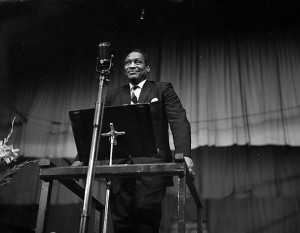 In 1957 though, Robeson was able to participate in the Miners’ Eisteddfod at the Grand Pavilion in Porthcawl thanks to a transatlantic telephone link between his apartment in New York and the gathered miners and their families in Wales. Finally, following the return of his passport he was introduced by Aneurin Bevan at the Ebbw Vale Eisteddfod, and soon after he would finally appeared in person at the Miners Eisteddfod too.

“You may not know it but I was brought up in traditions very similar to yours. My father was a Wesleyan minister, my brother is one and almost every Sunday I have taken part in similar hymn singings to those of you enjoying tonight. I bring you greetings from my own people who will appreciate, I know, the kind of welcome I have recieved here.” Paul Robeson, 1958 Eisteddfod

In my grandparents’ household, the film he made in Wales was seen as the greatest film ever made about the miner’s experience.    Many of my own family were coal miners and the impact that Paul had in this role cannot be overstated. For me it pulls off the rare trick of combining homely sentiment and working man’s politics. He was much loved as a friend of the pitmen, and I grew up knowing Robeson as the greatest of men – his huge baritone voice so familiar  from my grandmothers’ well-worn recordings.

A voice so pure, a vision so clear
I’ve got to learn to live like you
Learn to sing like you.” 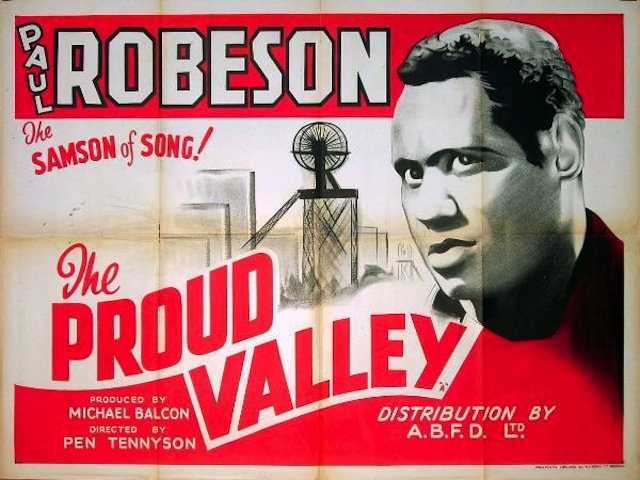 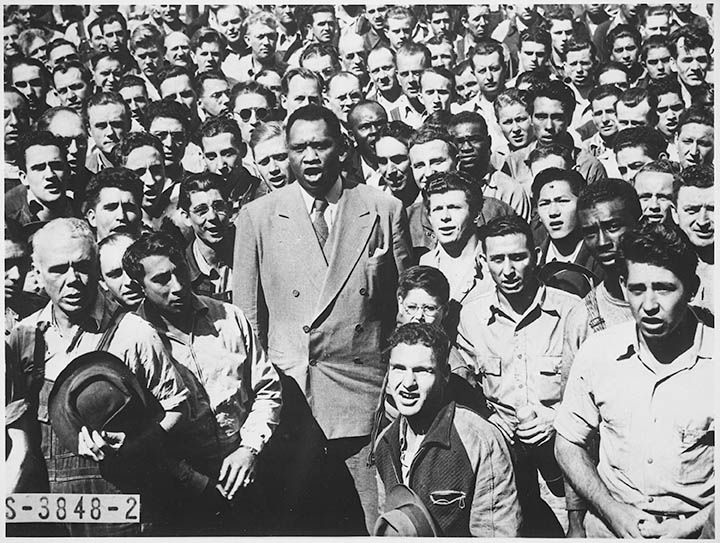 Paul Robeson leading Moore Shipyard [Oakland, CA] workers in singing the Star Spangled Banner, here at their lunch hour recently, after he told them: `This is a serious job—winning this war against fascists. We have to be together.’ Robeson himself was a shipyard worker in World War I.” September 1942. Photo credit: Office for Emergency Management. Office of War Information. Domestic Operations Branch. News Bureau.