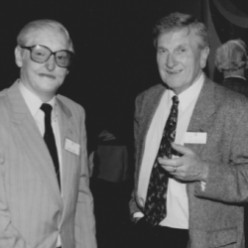 Peter is the chap in the photograph you see on the right. He’s the one wearing glasses. This was taken at some time in the nineteen nineties and to the casual observer, there is nothing remarkable about these two men.

He and Eric Jackson – on the right in the photograph – are friends from way back when and both have fascinating stories to tell. Both men are from Yorkshire and in their younger days, both drove competitively in rallies and races.Peter and Eric met when they were in their twenties due to their driving exploits – they’ve been friends ever since.

Peter did a lot of rally driving and also raced at Le Mans and in several Grand Prix races. However, his racing career was halted in 1966. 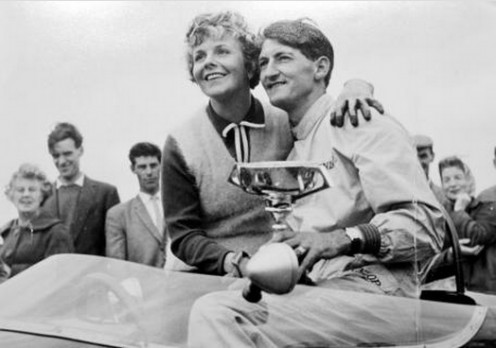 In his autobiography – seen in the sidebar on the right – Eric Jackson refers to Peter as ‘a pleasant looking lad.’

But then came Goodwood

It was 1966. Peter took part in a saloon car race at the famous English circuit, Goodwood.  Peter was racing what was in those days a successful competition car – a Ford Anglia. On the very first lap, his car was hit from behind. 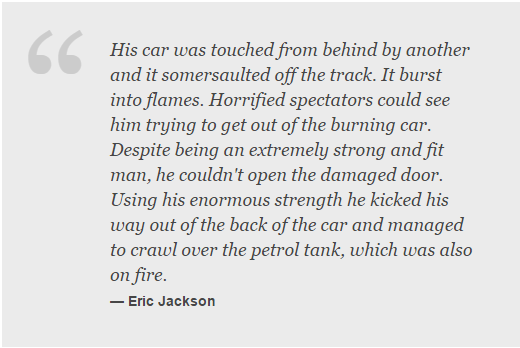 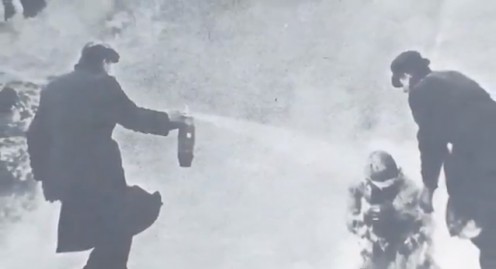 Motorsport is still dangerous today – for spectators as well as drivers – but in those days the safety standards were little more than primitive. As you can see above, Peter became a human fireball and men in ordinary clothing (not Nomex fireproof suits) rushed to help him with a tiny fire extinguisher.

Today there are expert medical teams at racing circuits but that didn’t apply in those days. But Peter was eventually airlifted to hospital suffering from third-degree burns. They covered sixty five percent of his body. When this is the case, it is unlikely that the patient will survive. But survive he did.

He had the good fortune to be treated by experts – doctors who had dealt with the horrific burns suffered by RAF pilots shot down in WW2. Peter was also strong and fit which contributed immensely to his recovery. He regained his health but not without terrible scarring. As Eric Jackson related: 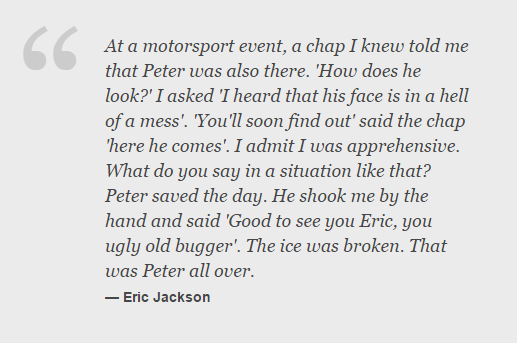 Of course, he needed a lot more surgery as the years passed by. But Peter now had a further mission. In the sixties, many drivers realised that the death and injury rate that was so horrendous in the sport needed serious attention. He was adamant that something should be done to change the regulations so that others wouldn’t suffer as he had.

He appeared in a full page advert in the motoring press. That doesn’t sound very significant, does it? But wait until you see it below. The motorsport magazines in which it appeared had huge circulations around the world. It was a further act of bravery for Peter to be photographed for the world to see – but his only goal was to prevent others from suffering from injuries such as those he had received. Here’s the ad: 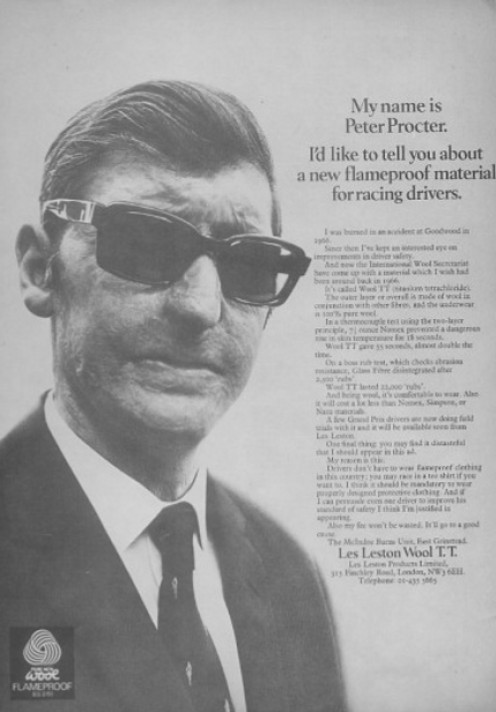 Alongside a picture of his scarred, reconstructed face, Peter describes a new fabric that had been developed that was fireproof. He explained that there were no regulations in place to ensure a driver’s safety in the event of fire. Here is some of what he said in the advert: 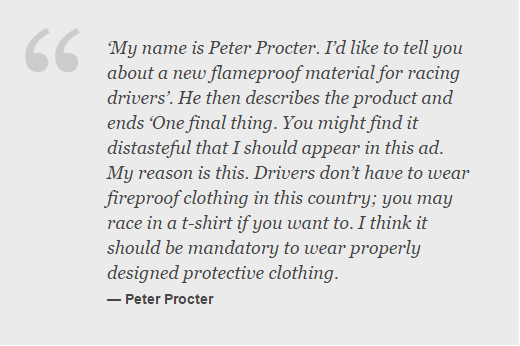 Of course, just like anyone who appears in an advertisement, Peter was paid. Some cruelly wondered if this was why he had chosen to appear. But anyone who knew Peter  also knew that he wasn’t like that. He gave his entire fee to the McIndoe Burns Unit where he had been cared for after his accident.

The unit continues its work today. Below you can see its current patrons. It is still treating men and women who have been burned in conflict, children and those who – like Peter – have suffered burns in accidents or housefires.

It is dependent on donations and you can find out more here. Find out more about its work in the war and today in the video below. 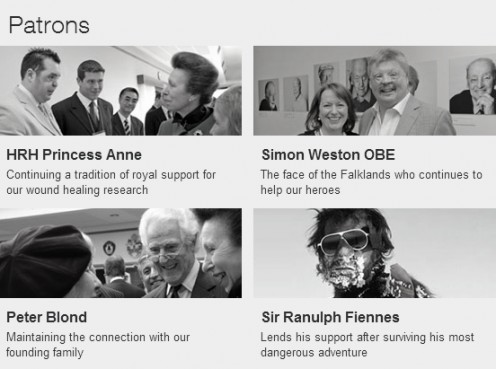