Pic of the Week: Hula Hoop

Home » All style » Pic of the Week: Hula Hoop

When it comes to family photos, are you more likely to pose people in the pictures or are you more likely to take some random shots and see what happens? Personally, I tend to like the less posed pictures. They in themselves tend to tell a story that you fill in the the looks on people’s faces. Sometimes it’s the surroundings that make it special, or the others in the picture that lend some weight to the whole story. 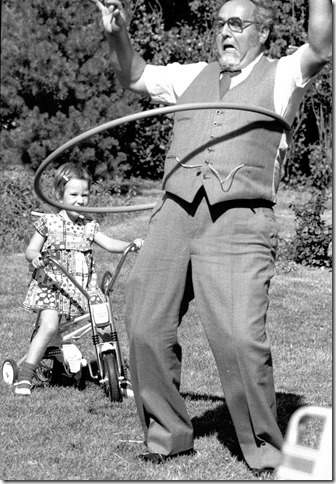 This is one of my favorite pictures. My father was so thrilled that we had bought a hula-hoop for our daughter pictured in the background. You see, he was an engineer in Brazil, working for one of the largest toy manufacturers in the world. He helped to design and build the machines that would eventually churn out thousands upon thousands of these hula-hoops for the children in Brazil. So many years later, to find hula-hoops again, just turned this “opa” into a lean, mean, hula-hooping machine.

Everyone at my daughters birthday party was laughing so hard at his antics, but no one could beat him at the game. Over 40 years later, he still had the ability to make that hula-hoop go!

We his children and grandchildren got to see how much fun my father could have re-living some of the days when he was just a young man. We learned more about his time in the Brazilian work force and what he did at the Toy Factory. I did not know, until that day, that my father designed and built the machine that not only put the hair on the heads of dolls, but it also styled the hair in one rotation of the machine. That was a significant jump ahead in doll making, as the styling of the hair was done manually before.

The only thing I remember also learning was that all of his designs to make the factory workers jobs easier, was circumvented by the greed of the shareholders.

Here in Canada, he streamlined a series of machines to do the same amount of work in 6 days, that normally took 7. He thought they would let the workers have a day off to be with their families, instead, they now worked 3 shifts, 7 days a week, so that more product could be made for the market and give the shareholders a bigger dividend. That was not what he was thinking when he did this, he thought it would be beneficial for the family to have time together, without causing the company a loss in production. I guess the core values of the company and my father’s core values did not quite coincide.

I still love this picture and it brings back fond memories of a good man!