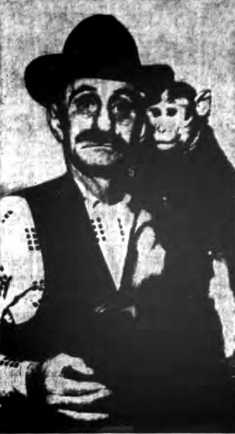 On 9th October, Edward Guillaume, known as Polidor the Clown, could stand it no longer. He was sixty nine years old and his forty nine year old girlfriend claimed that he was too old for her.

He took and ax and buried it in her throat. He then stabbed her repeatedly with kitchen knives.I guess he was upset.

Once a famous clown, he had reached the end of his tether.

In the 1930s he had performed in the Ringling Brothers Circus and had been beloved by adults and children alike. He had been born in France and since he was a young boy had been performing in Europe and America. He performed for kings and for presidents. But by the time he murdered Elena Gabrielle – also a circus performer – he was old and unemployed.

Elena had been a horse trainer in the circus but by the time of her death had a dog act. She was divorced from yet another circus performer, Charles Nelson.

She and Polidor had toured together to much acclaim, especially in South America. Their relationship had lasted for seven years and Polidor lived in a tiny cottage attached to the rear of her home.

But Edward suspected that she had been seeing a younger man, hence his rage.

When the police arrived at her home, alerted by the neighbours, they found Edward weeping over the bloodied body of his beloved. He saw them through the window telling them not to come any closer. He then took out a bomb…

When the bomb went off, it was nothing but a circus prop and simply produced smoke. The armed police burst through the kitchen door to arrest the aging clown.

When he appeared before a judge, in order to be charged, he said: