Political incorrectness?All in the mind

Jeremy Clarkson, the Porsche and the Argies 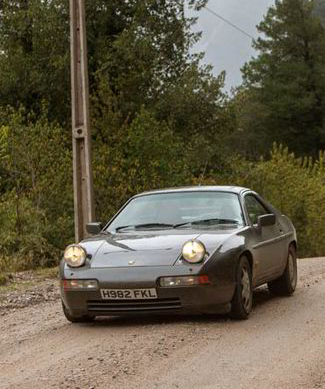 Whoops. I’m probably not supposed to say ‘argies’ am I? Is that politically incorrect? I have no idea any more what is and isn’t.

But you never know…

British(Brit, rather) television presenter of BBC’s Top Gear, Jeremy Clarkson, and his colleagues took three cars on one of their challenges to Argentina.

The Porsche pictured here is the very car Clarkson was driving.

This,or to be specific,its number plate, caused the entire television crew to be attacked and the cars destroyed by angry mobs of Argentinians.

Now you and I can look at that registration plate and see nothing wrong with it, right?

Well, the Argentinians thought it was a deliberate reference to the war which took place in 1982 over the Brit-owned Falkland Islands which the Argentinians had invaded. It was supposed that Clarkson- who indeed does have a wicked sense of humour and isn’t always as politically-correct as he could be – had chosen the number plate deliberately to annoy the Argies who, incidentally, had lost the war.

Nothing could be further from the truth but nevertheless, the Argentinians were inflamed and the television crew were, in their words ‘afraid for their lives’. The suggestion that the crew had deliberately chosen the number plate is ludicrous, and here’s why.

British registration plates and the law

Firstly, I need to explain that in the UK, the number plates are assigned to the car when it is first sold and they then remain with the car for its lifetime. Secondly,the Department of Motor Vehicles gives easy access to vehicle registration details.

The facts are these:

Consider these facts too

Part of the appeal of the Top Gear programme is often the three presenters making fools of themselves. But in this case, it was the Argentinians.

See James May talking about the Top Gear experience in Argentina

James May is one of the three presenters for the programme.