The Inspiration of Popeye the Sailor Man and A Spinach Sandwich

The Inspiration of Popeye the Sailor Man and A Spinach Sandwich. 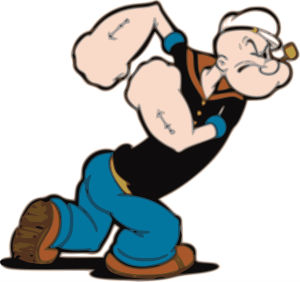 In 1929 on January 17th, the comic strip of Popeye first debuted in King Features. Apparently it appeared on the comic strip Thimble Theater, but before long became its most popular cartoon.

Orginally created by Elzie Crisler Segar, since his death in 1938 several other writers continued the comic strip. It appeared daily until 1994, when it was went to Sunday only issue. In the meantime we have seen it on television, in comic books, video games and even in the movie starring Robin Williams.

Though now he is often seem as politically incorrect—rather a lot of violence taking out Bluto all the time—we loved him when we were growing up. Olive Oyl, Swee’Pea, and the dear Wimpy, filled our little television screens so many days. He is a part of history, having lasted as long as the strip has.

I think Popeye must be responsible for a higher percentage of spinach sales as well. Don’t you wonder how many kids, wanted to swallow huge bites like Popeye could do? Since canned spinach was probably not kids first choice normally, parents must have been delighted with his influence. In fact, a study was done in 2010 that did confirm an increase of spinach intake after watching Popeye.

A NEW WAY TO EAT YOUR SPINACH

Growing up, we usually ate spinach canned. Today I would guess that fresh is much more popular, though I will always have a fondness for a can of spinach—it’s tradition after all. Today we eat it in everything. Raw in salads, or instead of lettuce on sandwiches, mixed with other veggies in everything from meatballs to soups, and as a main or side dish, sautéed alone or with onion.

There is one way that you may not have tried it: In a spinach sandwich. This recipe could have been co-created by Wimpy and Popeye together. Between Popeye gluggling down his cans of spinach, and Wimpy who was always gladly willing to pay tomorrow for a hamburger today, the blend of spinach and cheese on a bun or roll would have suited them. What about you? Have you ever tried one?

It’s a yummy vegetarian sandwich. On a chilly day a cold sandwich just doesn’t sound as good to me. That’s when I’ll make up one of these. It’s fast, easy, healthy and hot.

While I was experimenting with various spinach recipes a while back, I decided to give it a try. I had a batch of rolls, made fresh from my bread machine. Some extra spinach was in a bowl on the counter. Add a little cheese and and a slice of red onion…It turned out delicious!

So here is the recipe for you to try at home. You can skip the garlic if you want. You can saute it and the onion too if you prefer it cooked or softened. I like the crunch of the uncooked onion slice personally. Splash it with tabasco if you prefer a bit of heat.

The better you pat dry the spinach, the less soggy it gets. The cheese helps with that too. It surrounds the warm spinach with flavor and keeps the roll dry. I like provolone, but cheddar or your favorite cheese will work too. Give it a try. Bet you will be surprised too! It’s one of my favorites now. 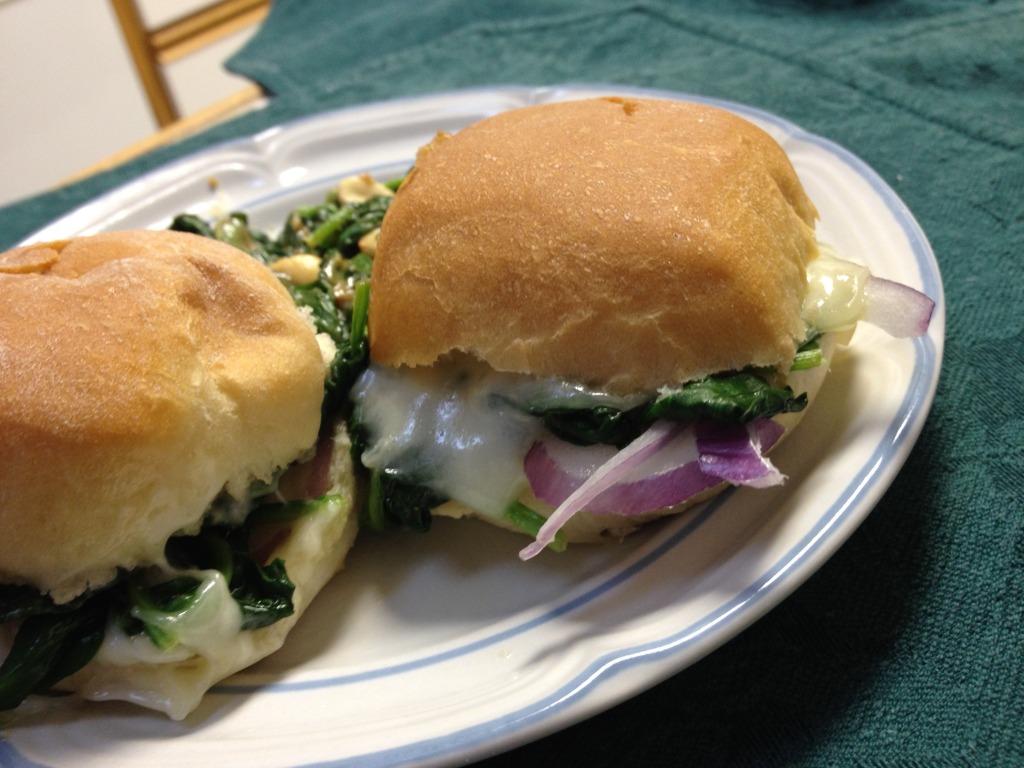 I’ll serve this sandwich with potato salad or chips, or sometimes just fresh fruit. It’s filling, but still light.  You can find this and many of my other favorite spinach recipes in my new cookbook. Color photos of each dish, with fast and easy meals for any time of day.