Pregnant Women on Television in the 1960s

Home » All entertainment » Pregnant Women on Television in the 1960s

Why Lucy was ‘enceinte’ in the nineteen fifties.

One of the most popular TV shows in the nineteen fifties – if not the most popular – was I Love Lucy starring married couple, Lucille Ball and Desi Arnaz. At the time, they were the most powerful people in the world of television.

In 1952 the couple discovered that they were expecting a baby. This was great news for them. They already had a small daughter, born just a month before Lucy’s fortieth birthday. Now they were going to increase their family but what about their popular TV sitcom? 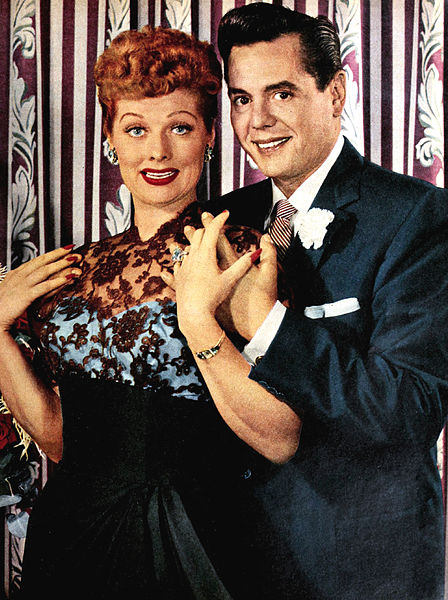 In those days, couples – even married ones – were not shown sharing the same bed on television. So the thought of showing a pregnant woman, and using the dreaded word pregnant, horrified the network bosses. There had been a previous on-screen pregnancy a couple of years before but that wasn’t on a high profile show such as I Love Lucy. But the couple had already conquered other television taboos at the time.

As far as the television bosses were concerned, it was bad enough that the beloved ‘all American redhead’ Lucy was married to a Cuban. In those days, there was a great deal of prejudice against Latin people. But when Lucy first discussed making the series, she insisted that her real-life husband should also be her television partner.

The network bosses were unmoved. So Lucy and Desi formed an act and toured vaudeville theatres. It was a huge success and the television supremos gave in – they had to agree that the couple were a great double act.

It was Desi who finally wore the television company down and eventually they agreed that a pregnant Lucille Ball could be shown on the programme, indeed it would be written into the script, but the word pregnancy was never to be spoken on the shows.

Therefore, on the episode in which Lucy discovers that they had a baby on the way was entitled Lucy Is Enceinte, using the more refined French word for the condition.

In that episode, a clip from which you can see below, Lucy has just found out that she is pregnant. She has been trying to tell her husband with no success. He (and rather gorgeous he is too) is singing at a nightclub that night and she finds a novel way to give him the good news.

What is so charming about this is that although Lucille Ball was a terrific comedienne she was not necessarily a brilliant actress. (Good but not great). But in the clip below, when Desi has heard the news and starts singing to her, her emotion seems to be completely real – more than likely because it truly was.

Watch and see what you think.

In 1953, Lucille Ball gave birth to Desi Arnaz Junior or, to give him his full name, Desiderio Alberto Arnaz IV. The C-section birth was planned to coincide with the episode of I Love Lucy on which she gives birth to ‘Little Ricky’.

When that episode was shown, on January 19, 1953, seventy two percent of all American homes with television sets watched –  that’s 44 million viewers awaiting the birth of ‘Little Ricky’. It received higher ratings than the inauguration of President Dwight D. Eisenhower, which received a mere 29 million viewers on the following day.

But even a year later, the fact that popular female television personalities were pregnant was disguised. If they appeared at all on TV, they were shown as head-shots only or their bumps were hidden behind furniture. A great example is the episode below of What’s My Line on which Lucille Ball coincidentally appears. Panellist Dorothy Kilgallen was eight months pregnant at the time.

This was the last episode featuring Dorothy prior to her maternity leave. As you’ll see when you watch the video, the second guest sells maternity clothes. The audience absolutely roar with laughter — in a way that suggests that pregnancy was an incredibly risqué subject in those days.

On most episodes of What’s My Line the members of the panel appear through curtains on the back of the set, acknowledge the audience then walk to the panellists’ desk. You can see at the beginning of the episode below that because Dorothy was pregnant, the panel are already in place behind the desk so that Miss Kilgallen’s baby bump would not show.

Skip then, if you wish, to the ten minute mark where the man who sells maternity clothes enters the set. Just a few seconds later (at about 10.23) when he meets the panel and shakes Dorothy’s hand, you can just – if you’re quick – see a glimpse of Dorothy’s bulge.

As the show progresses, and the panel try to guess the guest’s occupation, you will see that Arlene Francis has figured out (probably due to the laughs and the sniggers) that occupation has something to do with pregnant women but the word pregnancy is not mentioned. To keep the network happy, she asks if the product has anything to do with ‘motherhood’.

Then when Lucille Ball appears as the mystery guest, Miss Frances again has an inkling that the mystery guest might be Lucy. (Luciile Ball does not disguise her voice but in very funny speaking in a ‘foreign’ language. To find out more, she asks the mystery guest  ‘were you not too long ago interested in the sort of clothes our previous contestant sells?’

That was a nice network-friendly way of asking ‘did you recently have a baby?’

See the full episode below.