The Princesses and V.E Day

Home » All society » The Princesses and V.E Day

On May 7th, 1945, the BBC interrupted a broadcast of piano music to declare that the following day would henceforth be known as ‘Victory in Europe Day’. Hitler had killed himself several days before and the German forces had surrendered.

On the following day the crowds outside Buckingham Palace were greater than they had been for the coronation of the king, George VII.  The crowds were chanting ‘we want the king’. In due course, the family emerged onto the balcony – the king dressed in his naval uniform and the young Princess Elizabeth proudly wearing hers from the ATS.

Eight times the crowds called for the royal family and each time they appeared they were greeted with tumultuous applause and cheering. Winston Churchill joined them on several of the occasions, giving his famous ‘V for Victory’ sign.

That evening, as the crowds revelled outside the palace, fourteen year old Princess Margaret suggested that she and Elizabeth join the revellers. The king and queen, swept up in the excitement of the celebrations, agreed.

A Royal Night Out

A film has been made about the events of that evening and it’s highly entertaining and very funny. However, it is fiction.  But you know what it’s like — the film industry has a habit of re-writing history which is eventually accepted as fact. 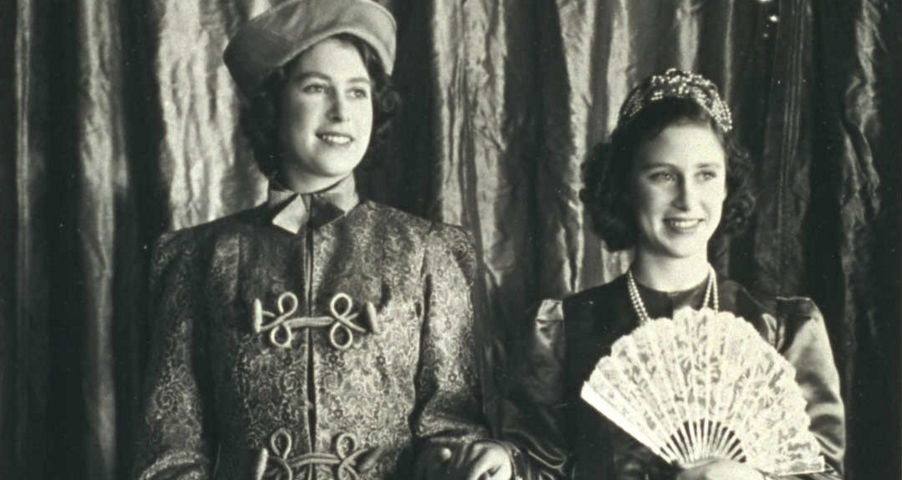 In the film, the princesses had two chaperones – both good-looking young soldiers. In reality there were no less that fourteen including their governess, their tutor, ladies-in-waiting, an equerry and several officers from the Guards. (The equerry was in fact Group Captain Peter Townsend with whom Margaret was later to have an affair). The film shows the princesses wearing pretty pink dresses and pearls whereas in fact, Princess Elizabeth wore her ATS uniform.

The party mingled with the crowd in several London locations, visited the Dorchester and the Ritz and returned to the palace. They had also danced in the streets and joined the crowds below the palace shouting for the king. They remained incognito.

The following day, they went out again. They walked miles amongst the revellers going to Trafalgar Square, Piccadilly and Pall Mall.

Piccadilly Circus was a particularly risqué place in those days, especially a club frequented by GIs called Rainbow Corner. These GIs had plenty of money and treats such as nylon stockings, chewing gum and chocolates. Inevitably girls who wished to make themselves an easy living by accommodating these soldiers gathered there.

These girls ‘of easy virtue’ would gather in Piccadilly Circus by the statue of Eros and they were known as the ‘Piccadilly Commandos’. They carried small flashlights so that they could reveal their bodies to their potential clients making their wares obvious. The Piccadilly newspaper vendors also sold certain items should any of the men have forgotten to bring adequate protection.

The Regent Palace Hotel was nearby and was only too happy to accommodate the GIs and their temporary girlfriends, renting rooms by the hour. The war had certainly relaxed attitudes towards casual sex. It’s likely that Elizabeth and Margaret saw things that night that they had never seen before.

Piccadilly Circus is where the two princesses found themselves at about ten thirty that evening. Shortly afterwards, they passed the Four Hundred Club, a place familiar to some members of their party and it had a reputation as being a venue for illicit encounters.

The party entered and drank and danced. Margaret Rhodes, a cousin of the princesses, was part of the group that evening and later explained that it was very dark inside the club but that she spotted at least four dukes of the realm — without their duchesses.

When the party left the club, they danced down Piccaddily and formed a conga line in which they danced through the posh Ritz Hotel. As they danced round the rather stuffy people who were dining their, they realised that none of the guests and diners they were disturbing knew that one member of this boisterous party was the future Queen of England.

The group then headed back towards the palace via Green Park — an area at that time that was known for its ‘dubious nocturnal activities’. The princesses, being country girls, had possibly seen animals indulging in certain acts necessary to the survival of the species but in Green Park,it’s likely that they saw humans doing the same thing.

Three hours after they’d left the palace, and after covering a round trip of five miles, they returned to join the crowds outside who were chanting ‘we want the king’. The crowds were rewarded when the king ans queen appeared on the balcony. In later life Elizabeth admitted that they had cheated slightly — they’d sent a message to their parents saying that they were outside the palace gates and asking them to appear on the balcony.

The film allows Princess Elizabeth a minor romantic interlude but in fact, she had been in love with Prince Philip since she was thirteen years old and kept his photograph by her bed.

See the trailer for the film.