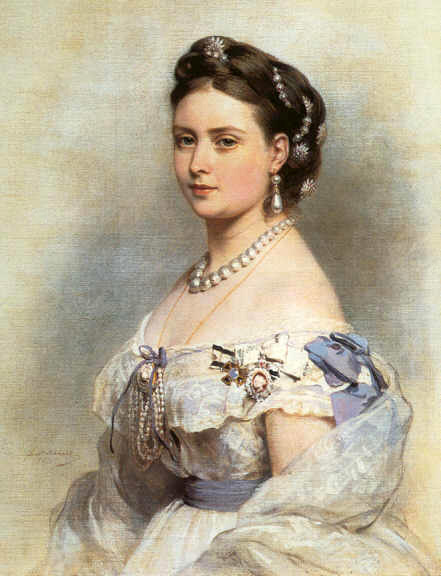 Princess Vicky was the eldest child of Queen Victoria and Prince Albert. She was a lively and intelligent girl and was well-trained by her parents to occupy a regal position.

They expected her to marry well into another European royal house.

They didn’t exactly arrange her marriage but they tried their best to facilitate it.

When the Great Exhibition took place in London in 1851, the royal couple invited Prince William of Prussia and his family to visit. Princes Albert and William were old acquaintances.

But the invitation had another meaning- William’s eldest son and heir, Frederick was a most eligible bachelor of twenty years old.

The fact that Princess Vicky was merely ten years old was of no consequence – the royal couple believed in forward planning.

The young people were encouraged to spend time together alone – which would have been unthinkable had Vicky been a little older – and the prince was delighted with the child.

She was bilingual (her father was German) and he loved the fact that he didn’t have to converse in his halting English. He also admired the way the English royal family were so very free and easy, compared with his stuffy and formal household and court. All was well.

By 1855, Vicky’s parents were able to take matters a stage further, the girl was fourteen now, after all. They invited Prince Frederick to Balmoral. Here, now that Vicky was older, the romance really blossomed. Vicky was now blooming into womanhood and Frederick fell hook, line and sinker.  Inevitably he proposed and she happily accepted. Queen Victoria and Prince Albert were delighted. They stipulated that the marriage should take place two years hence when Vicky would be of age.

The thing I love the most about their love story though is the imperious letter Queen Victoria wrote to Frederick’s parents when it was expected that the wedding would take place in Prussia. Traditionally, weddings take place in the bride’s hometown but because Frederick was the heir to the Prussian throne (and therefore in nobility eyes of ‘superior rank’) Frederick’s parents insisted that the heir to the throne should be married in his home country.

“The assumption of its being too much for a Prince Royal of Prussia to come over to marry the Princess Royal of Great Britain IN England is too absurd, to say the least.

Whatever may be the usual practice of Prussian Princes,it is not every day that one marries the eldest daughter of the Queen of England. The question must therefore be considered settled and closed.”

The wedding of Princess Victoria and Prince Frederick William took place on 25th January, 1858 In St. James Palace in London.