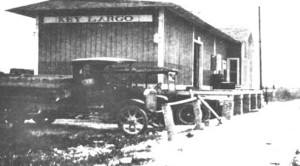 By the time that Maxwell Anderson wrote his prose play Key Largo, the drama’s island setting on the southern tip of Florida had almost erased the name. Anderson’s self-important drama was actually focused on the Spanish Civil war and was written in the form of a Shakesperean tragedy. The trip to Florida by the plays protagonist King McCloud (Key West is his destination) was one of atonement as he seeks out a fallen friend’s father and sister. There in the Florida backwaters he finds a local tinhorn gangster and is forced to take a stand.

In 1939 Key Largo itself was still recovering from a category five hurricane that hit on Labor Day, 1935. The hurricane’s strong winds and the surge destroyed nearly all the structures between Tavernier and Marathon. The town of Islamorada was obliterated.  It is still the strongest and most intense hurricane to ever make landfall in the United States. Over 400 people lost their lives. 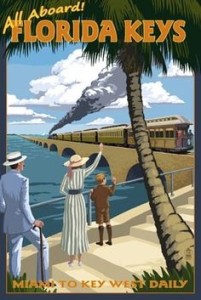 Key Largo was just one of a few small communities on the island – apart from a brief land boom Key Largo ran a steady citrus economy, with Key limes and grapefruit the principal products. After the railroad was not rebuilt and the Key Largo post office was discontinued, responsibilities transferred to Rock Harbor further south, which gave most of the island a Rock Harbor address.

In 1939 Miami Beach developer Carl Fisher began constructing the Caribbean Club, a fishing club for men of modest means, “a poor man’s retreat” but it was destined to have a Hollywood connection.

The classic movie ‘Key Largo’ may have entirely filmed in Warner Brothers back lot at Burbank Studios, but the movie was born right here at Fisher’s new resort. Director John Huston and screenwriter Richard Brooks stayed at the hotel while writing the adaptation of Maxwell Anderson’s play. Brooks worked on the script beneat the shade of cocont palms in the grounds of the fishing club while Huston made good use of the club’s craps tables and roulette. It was reported that Brooks lost $6,000  – about the amount he was paid for the script.

The film version of Key Largo has very little of Maxwell Anderson’s original play. All the characters had their names changed, and whole tracts – including the opening scenes set in the Spanish Civil War were cut. This was very unusual for an Anderson play,  whose best-known plays had generally been filmed faithfully. Huston though seems more interested extending Bogart’s ongoing chatercter gallery, best exemplified by Rick Blaine in Casablanca and Harry Morgan in To Have and Have Not. The movie’s final shoot out aboard the boat  is actually an unused scene from director Howard Hawks movie of Hemingway’s original To Have and Have Not story.

We arrived out of season and there wasn’t any suitable places to stay, but we finally discovered a small hotel which looked attractive, and persuaded the owners to open the place for us before the season started. We had no sooner settled down to work than they moved in a dice table, a roulette wheel and a blackjack table. Thereafter, when Richard and I weren’t writing, I was gambling….
John Huston – An Open Book 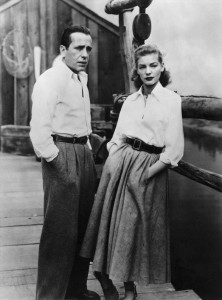 Frank McCloud (Humphrey Bogart), dismayed by the horrors of World War II has arrived at a rundown hotel in Key West to visit Nora Temple (Lauren Bacall), the widow of an army buddy killed in the war.

The movie was produced in 1948, the same year when two late season hurricanes, late in the season, barrelled through the Florida Keys. Little of the movie shows Florida scenes, though a second unit was dispatched to the area to film external shots of the overseas highway and other generic scenery.

A few locals dined out on yarns about when Bogie and Becall were down in the Keys filming, but little of the movie was shot outside of California no matter how tall the story.

Key Largo was one of my happiest movie experiences. I thought how marvelous a medium the movies were, to enable one to meet, befriend, and work with such people. What a good time of life that was—the best people at their best. With all those supposed actors’ egos, there was not a moment of discomfort or vying for position. That’s because they were all actors, not just ‘stars.’  Lauren Bacall – By Myself 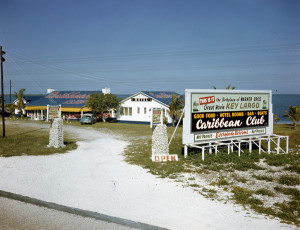 “This is it, the birthplace of Warner Bros. great movie Key Largo”. Caribbean Club in Key Largo, Florida.

After the notoriety of the movie brought attention to the island the residents of Rock Harbor passed around a petition to have the town’s name changed to Key Largo. Local businessmen wanted to capitalize on the international popularity of Key Largo, but there was not even a Key Largo mailing address. I and on  June 1st 1952 the sign was changed and a new cancellation stamp used. Key Largo, Rock Harbor, the Ocean Reef Club, the Angler’s Club and Newport were all combined into one postal community, and everyone north of Tavernier had Key Largo as a new address.

A definite increase in growth was experienced  by Key Largo in the 1950s partly due an improved highway, the fresh water pipe line, public electricity and a certified High school.. The first published phone book in 1951 listed the following amount of listings in the upper keys :Tavernier, 75, Rock Harbor, 26, Key Largo = 16, Plantation Key = 5, Garden Cove = 1. Matecumbe from Long Key to Snake Creek 148. A little short of the 10,433 who lived there half a century later!

Movie or no movie, Key Largo was still a quiet spot on the long drive to Key West. 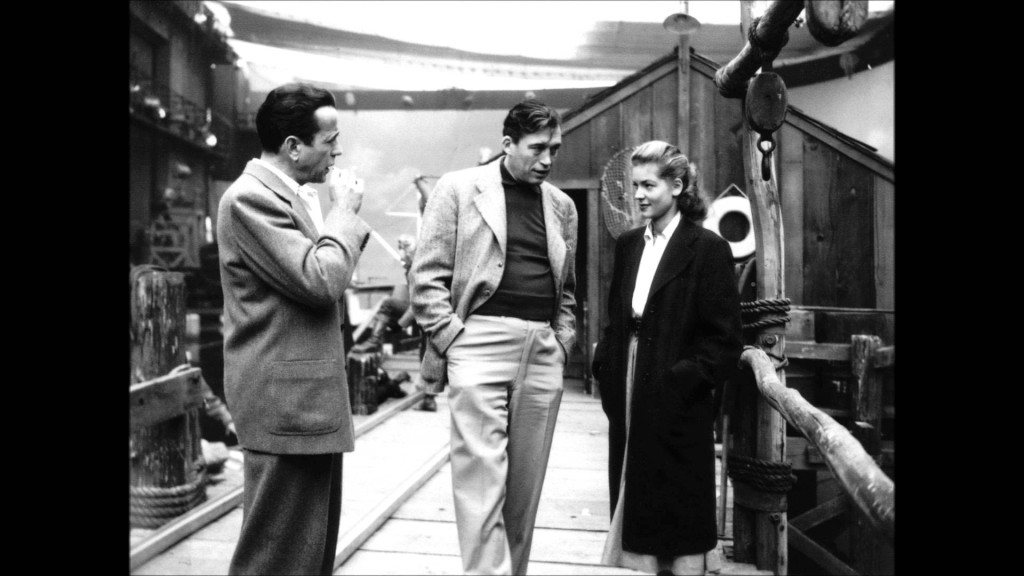 Behind the scenes on the set of Key Largo – Warner Brothers