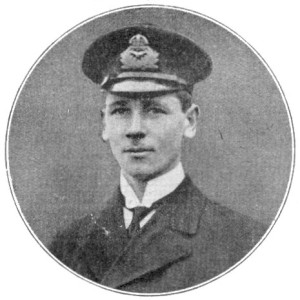 Known as Reckless Rex because of his devil-may-care attitude, Reginald was a First World War fighter pilot. He was the first pilot for bring down one of the fearsome Zeppelins that the Germans unleashed upon Britain in 1915.

He had been born in India where his father was a railway engineer. It’s said that he received no formal education until he was a teenager  and spent a relatively undisciplined childhood.

He was also classed as having a discipline problem when he joined the forerunner of the Air Force, the Royal Naval Air Service, when war broke out. But no-one could deny his flying skills.

He was a confident young man and his most daring mission – and one that made him a war hero – took place on June 7th. He was based in Belgium and part of his duties was to intercept and hopefully destroy the Zeppelins which were attacking Britain. These were huge airships that were being used to bomb cities in the United Kingdom.

Warnefield spotted the LZ 37 which was heading towards Calais on a bombing mission.  He attacked it with his machine gun and began to drop bombs onto the Zeppelin. His final bomb was the one that destroyed the LZ 37 which burst into flames and crashed to the ground. But Warnefield’s tiny plane was damaged by the blast. He had no choice but to make crash landing behind enemy lines. 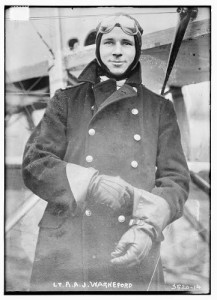 Now in German territory, he managed to repair his primitive aeroplane and was able to return to his airfield. This led to him being awarded the Victoria Cross – the highest award a member of the armed forces can achieve. Ten days after he had shot down the airship he received the Légion d’honneur from the French authorities. That same day, he went to a place called Buc in France, his job being to inspect and test an aircraft then fly it to a division of the Royal Naval Air Service. Accompanying him on the flight was an American journalist named Henry Beach Newman.

When he was ascending, the biplane almost literally fell apart. The wings on the right collapsed which led to the plane virtually disintegrating. Neither Reginald or Newman was strapped into the plane securely and both fell to the ground. Beach was killed instantly. Reginald was taken to hospital but died, aged twenty three, of his injuries.

He was mourned by thousands. His mother received many telegrams of condolence, including one from the king.

See genuine footage in the video below.