Home » All books » A Review of High Crimes, the Movie and the Book 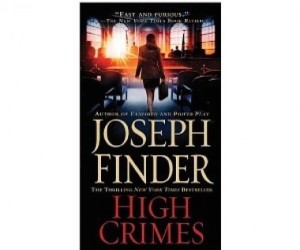 If you could enjoy watching Ashley Judd, Morgan Freeman, James Caviezel all in the same movie, would you pass it up? I wouldn’t. When High Crimes came out in 2002, I was anxious to see it.

First, there was Morgan Freeman. I’ve been a fan of his as long as I can remember, but since his role in Shawshank Redemption, he’s become a favorite. His voice alone makes his movies worthwhile, though of course he is a terrific actor too.

Then there is Ashley Judd. Another good actress who is always a pleasure to watch in a film. Throw in Mr. Caviezel, and an excellent cast of supporting actors, and you have.

The plot was excellent as well. Definitely my kind of story. Suspense, courtroom drama, twists and turns as Ashley Judd, playing a lawyer, defends her husband from a crime she is sure he could never have committed.

It was a tense drama with plenty of excitement, and I loved it!

Fast forward a dozen years. I’d found a new author I was enjoying immensely, Mr. Joseph Finder. After reading several of his books, I ran across High Crimes. Since the narrator of the audiobook was one of my favorites I thought I would give it a try. It wasn’t until I started the book that it registered that is it was the basis of the movie.

Seeing the movie first didn’t interfere with my impression of the book. It was excellent. Mr. Finder writes clever suspense stories, usually coming at the story from a different angle. This was no exception.

You can read my comparison review here.

Naturally after finishing the book I had to see the movie again while it was fresh. It didn’t follow the book exactly. Yes, the book was better, with the detail you expect, and some variations that made the plot even more complicated and suspenseful.   The movie was still a pleasure to watch. It isn’t often a movie satisfies after reading the novel, but this one does. I will read and watch both versions again.

Mr. Finder is a terrific suspense thriller writer.  You may recognize other books that became feature films.  His newest release, The Fixer, is getting rave reviews. Looking forward to reading it soon.