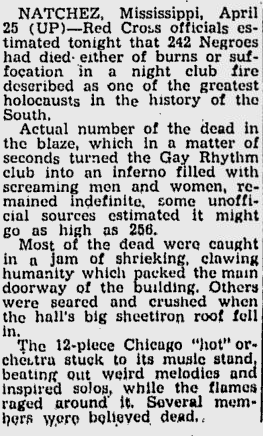 At 11.30 pm,on the night of 23rd April, 1940, hundreds of people were enjoying listening to music and dancing at a venue called the Rhythm Club in Natchez, Mississippi.

Before midnight, at least two hundred of them were dead. Fire had blazed its way through the packed single-storey building.

Just a few weeks before the fire the owner,  Edward Frazier, had boarded up with windows to that people didn’t peek in and enjoy the entertainment without paying. The interior was also decorated with dried Spanish moss and this had been sprayed with a flammable substance in order to keep it free from bugs. Frazier was one of the people who died in the fire.

The club took only eleven minutes to burn down. The occupants rushed to the one door ( the back door had been bolted and padlocked and there were no side entrances) and some managed to escape but most of the people who had been having fun that night were killed by fire, trampling or smoke inhalation.

How was the fire started?

One witness claimed to have overheard two girls who were leaving the ladies’ room. Ernest Wright was an elevator operator by day and went to the club that night to collect his wife. As the two girls walked past him, he claimed that he heard one say  ‘Now you did it.You set the place on fire’. He continued:

‘I didn’t see anything for a minute.Then I saw a blinding sheet of flame.In a moment,the whole place was on fire’. 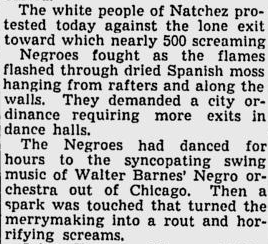 The Spokane Daily Chronicle, on the day after the fire, said that police were searching for ‘a drunken Negro’ who had been accused by others. Five men, all black as were most of those killed, were arrested for arson but charges were later dropped. When the fire started, the Walter Barnes ‘Negro Orchestra’ (see the newspaper cutting on the right) – Barnes himself did not survive the fire in common with nine of his band members,including a girl singer.

There was no accurate count of how many people died that night. Another newspaper, on the day after the fire, reported that 212 bodies had been recovered but that ‘a large number’ of others were in hospital in serious conditions – so the death toll was expected to rise.

It also reported that most of those who lost their lives were fifteen or sixteen years old.