Ring in the Spring – Woodland Bluebells

It’s been a long time since I lived within walking distance of an English wood. At this time of year the best ones become a magical perfumed carpet of blue flowers and can’t help but remind me of a childhood long gone.

On visits to England I always to try to take a walk through the woodlands, to breathe in that heady scent concoction: Gorse, wild garlic, Scots pine, wet woodland, hawthorn blossom, honeysuckle, stinkhorn, elderberry… Whatever the time of year there’s always a fragrance that turns back time. I owe a lot of my love of countryside to my grandmother, Lily Hill.

Lily, with her husband Bill, had four daughters and a son, who within a decade gave them over a dozen grandchildren, all growing up close enough to visit regularly.

My earliest memories as a toddler in the 1960s include playing on her well-scrubbed back steps or getting under people’s feet around the kitchen table. As my parents lived down the valley weekend visits involved walking along the wild banks of the Dearne and Dove canal and up through the old footpaths of Elsecar, across the old forge and past the Milton ponds. These trips gave us kids a love of wild flowers; feverfew and dandelion, buttercups and oxe eye daisies, and down in the reeds there were bullrushes and water lilies. 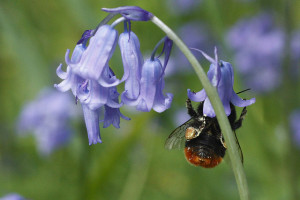 Picking bluebells became a Spring family tradition. Gran would round up us little ‘uns and we’d march down the hill and out into the countryside and the ancient Skiers Spring Wood, which at this time of year will be a carpet of blue. Some of my younger cousins were so small they could get lost in the fragrant  bluebells, my little sister busy picking her own little bunches, pollen dusting her summer dress.

Us older boys would be off swinging from trees and rolling in the dirt. We were told to be careful “It might not look like it but there was a coal pit here not long since.” warned Gran (a pit being what everyone locally called the coal mines). Not that we’d be too bothered – across the stream there’s an old rope – perfect for swinging on and getting filthy. Cuts and bruises were what we were little experts at. 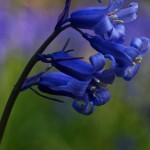 Skiers Spring years ago was the site of a brick, tile and terra-cotta works. Gran told us about the kilns that were there when she was a girl. Later she told us about Adamson’s Siding and the drift mine where her brother Sam Howarth worked before the Spring Wood Colliery was sank into the Barnsley seam. She told us how she’d make him a home-made lunch and walk it on down to him packed snug in a snap tin. He was a few years older than her and she idolised the lad.

As kids these stories of the ancient long lost relatives tend to be forgotten – we had much more important games to play. Only now, long after our grandma had passed away, I realize that our pilgrimage down to the old woods was her way of remembering Sam, who was taken from her on the battlefields of the second world war.

At the end of these long sunny spring days we’d walk the five miles down the valley and along the canal towards home, carrying bags full of fragrant violet that would perfume the house (and our clothes) for days. Being into the picking habit we’d add bluebells and daisies and elderflower and our bunches were almost bigger than we were by the time we’d arrived home in Hemingfield. 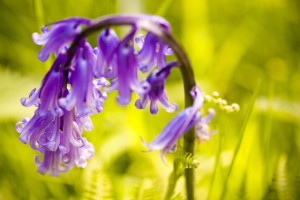 Bluebells  – proper native wild hyacynths – are endangered these days and children are not encouraged to pick them.

England is home to over half of the world’s population so it’s up to the British to make sure they survive. A superficially similar (and noteably non-scented) variety is quickly taking over in more urban areas – it was imported as an ornamental garden plant but it’s already leapt the garden fences and gone feral. Now one in six English woodlands is home to this new variety or a hybrid, which comes in a range of shades – not just blue violet.

For me though, the sight and smell of bluebells remains deeply nostalgic. I imagine my grandmother a hundred years ago, not yet a teenager skipping down the hill bring her brother his lunch, most likely gathering wildflower blooms on the way back home.