From Brian Johnson of AC/DC: An autobiography with a twist. 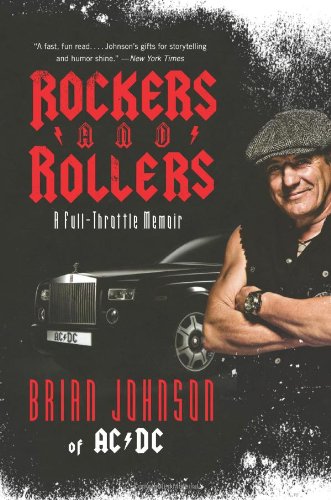 Rockers and Rollers: A Full-Throttle Memoir

This is really such an excellent book. It was tailor-made for me and it might be the same for you. At the very least, it’s a wonderful autobiography of a boy growing up in northern England and making the big time in a rock band. But it’s so much more.

Even if you’ve never heard of Brian Johnson (really?) – even if you hate rock music (really??) you’ll still get  kick out of this hilarious book.

You see, Brian – superstar admittedly – is just a regular bloke. And without the help of a co-writer (which so many people use, unfortunately) he tells the story of his life in a pithy, easy-to-read format.

Each chapter is self-contained and only a few pages long so it’s the sort of book you can dip into whenever the mood takes you. (This makes it, forgive me Brian, a great ‘bathroom book’ But that’s appropriate really, because it’s wet-yerself funny).

Brian writes conversationally.  Read a chapter and you’ll feel as though you’re sitting in a pub over a pint of beer whilst he relates stories from his life. Sometimes these are funny (well, more like hilarious) and some will bring lump to your throat.

Brian is, and has been since he was kid, bonkers about cars. Each chapter refers, in some way no matter how small, to something on wheels. But don’t get the idea that this is a rich rocker’s reminiscences about Aston Martins and Porsches (although they do feature).

No, you’ll read about the crazy goings-on in the AC/DC tour bus (now they are fun stories), his dad’s old Wolseley back in nineteen sixty something and his brother’s Ford Anglia. But it’s not just for petrolheads and head bangers. It’s simply great fun.

I felt an affinity to AC/DC when I first started listening to them in nineteen seventy something. When I came to live in Florida I discovered that Brian Johnson had done the same – two northern kids of more or less the same generation had left the cold and were basking in the Florida sunshine. Soulmates, I reckoned.

Then, when we were racing at Moroso or Sebring or one of the Florida circuits, there he was. Brian Johnson of AC/DC racing a Lotus Cortina just like Jim Clark and my dad did. His racing team is called De Luca – after his Italian mum.

You don’t have to be an AC/DC fan or a car lover to adore this wonderful book. It’s just so bloody good. (Oh, and you know us Brits. If a drop of ‘language ‘ offends you this isn’t for you. But you know what we’re like…..)

The book gets great reviews on Amazon too. Read more.