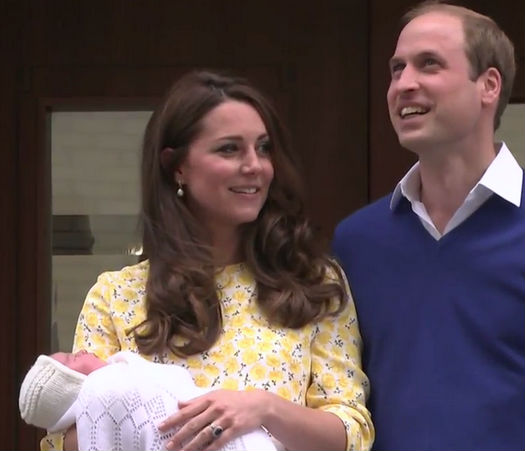 May 4th: The new princess has been named. It seems that the British punters were right when they placed their bets. (I got only one right). Welcome to Princess Charlotte Elizabeth Diana.

May 3rd: We have a conspiracy theory! A Russian newspaper is claiming that the duchess actually gave birth a few days before. They say that this is because Catherine looked too well-groomed and gorgeous when she appeared on the hospital steps with the baby. One woman said “There is nothing which would help a woman, even if she gave birth with the help of best doctors, stand up five hours after giving birth “. What nonsense! I did (I sneaked off for a cigarette) within about an hour and that was a long time ago.

Giving birth in Russia must be a right rigmarole.

We know that Catherine’s hairdresser went into the hospital a few hours before the public appearance on the steps.  Her couture dress and her shoes were probably ready weeks ago. Her fingernails are always immaculate (and childbirth has no negative effect on the nails) and she is adept at applying makeup. Why wouldn’t she look as gorgeous as always?

May 2nd, 2015: Kensington Palace announced that Catherine, Duchess of Cambridge, had given birth to a baby girl.

Catherine and William’s daughter was born at 8.34 British Standard Time and weighs a healthy 8lb 3oz.

Prince William was with his wife throughout and the new baby is fourth in line to the throne.

When Prince George was born in 2013, the public interest was huge. But who would have thought that the same frenzy would occur for William and Catherine’s second child?

But even weeks before the due date, the police had erected barricades around the Lindo Wing of St Mary’s Hospital knowing that the area would be besieged by the media and royal followers.

Of course, the exact due date wasn’t known but ‘mid to late April’ was the best clue we had.

May 1st – having no news, the media is resorting to old wives’ tales. May 4th sees a full moon and it’s said that this brings on labour. Now wouldn’t that be interesting? But nope.

April 30th – parking restrictions had been in force for some time now outside the Lindo Wing where the birth will take place. But on the last day of April, this was extended to May 5th. Did they know something we didnt? Nope.

April 29th – this was William and Catherine’s fourth wedding anniversary. Wouldn’t it be fun if the baby was born on this date? It would give the family one less date to remember when buying anniversary and birthday cards. But nope, that didn’t happen.

April 28th – William and Catherine sent pastries and hot drinks to the crowds who were camping out on the streets of London awaiting the royal birth. This must be a first. Some people had been camping out in the streets for over a week. Most of these people are dressed in patriotic garb. The pastry boxes were tied with pink ribbon and the media decided that this was the couple giving a huge clue about the sex of their second child.

Waiting outside the hospital where Kate will have her baby… The Royal couple sent these fans breakfast. @TODAYshow pic.twitter.com/LhWNkKty2g

April 26th – the Telegraph, normally a reliable source of news ‘revealed’ that the Duchess’ due date was April 23rd, leading to speculation that there might be an induction taking place soon. It’s said that Prince George was born three days after he had been due.

April 21st – the queen was born on this day in 1926. Would her newest great grandchild follow suit? It would have been nice, but nope. 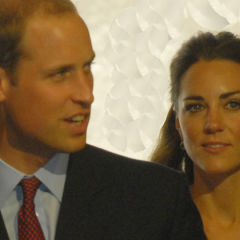 What names would you choose for the new royal baby? The Duke and Duchess of Cambridge – William and Catherine – are expecting their second child in April, 2015. This baby will be the sibling of George Alexander Louis, born in the summer of 2013. In the UK, bookmakers are taking (and will presumably make) a fortune as people bet on a) the birth date b) whether the child will be  boy or a girl and c) what the names will be…. 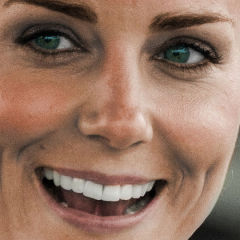 William & Kate: Baby number two On March 20th, 2015, it seems that American magazine were tired of waiting the required nine months for the expected royal baby. Not one but two of them reported that Catherine, Duchess of Cambridge, had given birth to a girl in dramatic  circumstances. See the screenshot below from the Daily Mirror, a British newspaper. As you can see, it was announced that the baby had been born, that it was a…